Why you Should Watch Jaws on a big Screen

This July 4th we didn’t go away, we didn’t barbecue. We didn’t even go out with friends. I wasn’t feeling terrific or up for much holiday socializing, so we decided to stay low key, and to ourselves. After homemade lobster roll sandwiches from the Lobster Place we headed to Alamo Drafthouse in Brooklyn to see one of our favorite movies of all time. Finally I was crossing off a long awaited thing on my to do list; watch Jaws on a big screen.

Jaws, again, my husband though excited lamented. You couldn’t think of anything else?! It’s true. I’ve seen it probably hundreds of times, I can almost recite it from start to finish. But I certainly wasn’t around to see it in the movie theaters and I’d never seen it on a big screen. So stepping into the new Alamo draft house and snuggling into our giant seats I knew though the movie wasn’t new, the experience would be. I couldn’t have been more right. Jaws is a movie best served in summer, and with big intentions. It’s become a staple of not only summer, but outdoor movie experiences. The Alamo Drafthouse in Texas even has a now famous screening in the water with inner tubes. And many similar ones have followed. That’s how hardcore this gets. Depending on where you live you might be able to watch Jaws on a movie screen somewhere too, this summer. There will be plenty more screenings. And if you can, you definitely should. 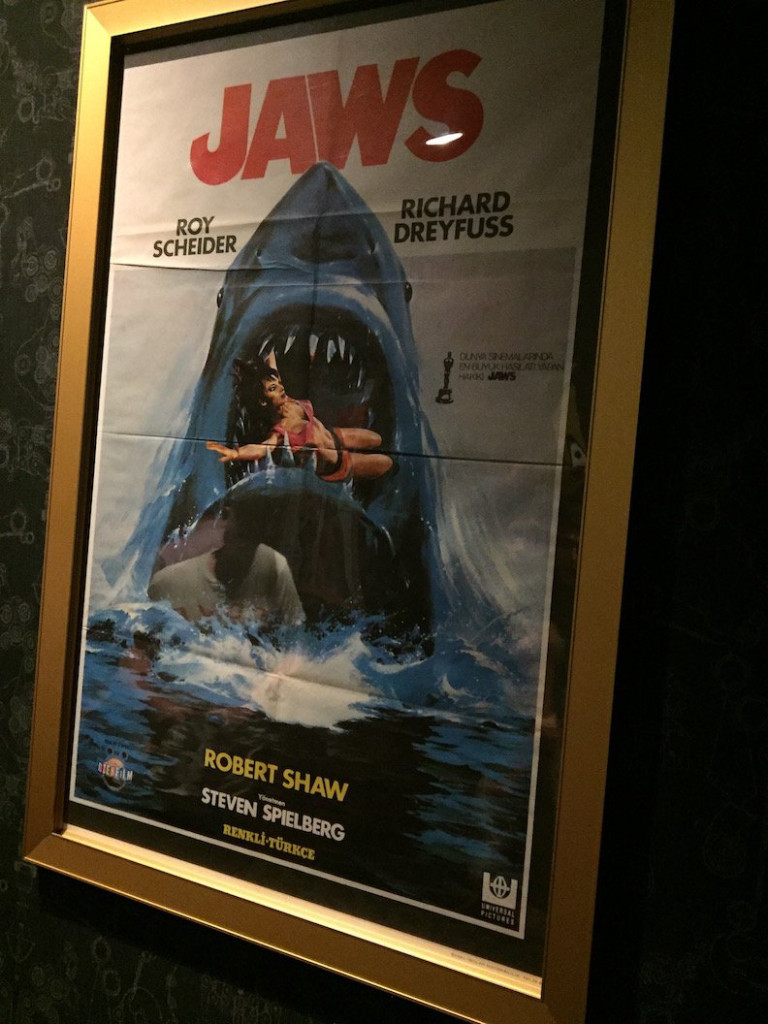 For one, missed moments. I’ve seen Jaws more times than I can count, and when you’ve seen a movie that much, it’s hard to come by any surprises. Yet, at Alamo this week, something new happened. Towards the end of the movie when Quint, Hooper and Sheriff Brody are on the boat hunting our angry friend we see a slow wide angle shot of their boat at sea in night. In the background, two separate scenes show a shooting star. I don’t know if TNT AMC and IFC cut that scene out, or if my TV just wasn’t quite large enough to capture it. Either way getting to watch Jaws on a big screen gave me a shooting star this time. I also got to see parts of Hooper’s final cage diving scene that I had definitely never seen before. Reason enough to make the trek to Brooklyn on the fourth.

Human Interaction. In all the many times I’ve watched Jaws I’ve never done so with more than one other person by my side. But to see Jaws this summer, on a big screen, it’s like a totally different movie. Unlike what I got at home. Some don’t love watching a film in a crowded movie theater but I happen to love it. Raucous laughter around me during some of the funniest moments and other more jaw dropping emotions heard out loud. Where else can you literally surround yourself with that kind of sound? We may be a country split in half, but at the movies we’re all equal, and subject to various forms of unifying responses and emotions.

The screen size. A shark attacking on your tv screen is jaw dropping, but Jaws in surround sound ferociously coming towards you is something all together different. And it’s worth every moment of it.

It’s the ultimate summer movie. These days, outdoor movies are a dime a dozen. What started small has expanded to piers, parks and roof tops. With this expansion, the selection of summer outdoor movies has increased in variety as well. But certain classics always seem to be on the yearly rotation. Breakfast at Tiffany’s, Hitchcock, and of course, Jaws. But no matter what your adrenaline level for outdoor film watching, Jaws should definitely be at the top of the list. It’s got July 4th, sharks, love, and one sweet hero protagonist. Watching it again at Alamo wasn’t that different from all the other times I’d seen it except it only solidified more what I already knew. Jaws is a quintessential summer movie, but it’s also just an amazing movie period. And while you will likely have dozens more opportunities to watch it on cable before the year is out, seeing this film on a big screen truly is a special experience.

It’s more relevant than ever. It touches upon the mishandling of the closing of beaches; a topic recently in the news. Plus, sharks are more popular than ever. Certainly more accepted in the mainstream now then when Jaws hit theaters in ’79. We’ve seen the rise of recent female driven shark movies like The Shallows, and the more recent 47 Meters Down. I’m pretty sure Spielberg wasn’t influenced by Left shark and the only famous on screen tornado was the one that sent Dorothy to Oz and as far as I can recall there were no sharks inside it. Sharks have come a long way but while they continue to remain popular let’s remember to always pay homage to the original.

You can Watch Jaws in NYC at the Public Library on Tues, July 11th and Friday 7/21 in Staten island