Why a They Live Remake Could work now

No old movies are safe from remakes these days. Either they’re being redone for the new age, reimagined completely, or in the case of many movies rebooted with gender reversals. Most remakes make me cringe, especially horror and mysteries; my favorite genres. Tearing them up and repackaging them might present them fresh for new audiences, but it also can ostracize loyal fans. Lately, I’ve been thinking about all the movies they remake and wondered, how do they pick which ones will work with a gender flip, or new, updated 21st century look? And if every movie is up on that proverbial chopping block how do so many countless others remain untouched? Recently I was flipping through the channels when I came upon the old John Carpenter Sci-fi horror flick They Live. The 1988, now cult movie, starring then pro wrestling star Roddy Piper is not an impossible find. It can be found on HBO much of the time, and is mostly ridiculous and painfully acted. But despite being poorly executed and dated, it’s shockingly truly relevant for our current times. This brought me back to that original thought. Movies which shouldn’t be touched, but get remade anyway, and those that would actually benefit from a remake. In this case, a They Live remake might not only work, but could perhaps be a chance to top the original. Something you don’t see happen too often. Here are a few reasons why a They Live remake could totally work in today’s world and be a huge hit.

1. In They Live, our world has quietly been taken over by aliens who are possessing our minds by sending us subliminal messages through advertising. While the movie is not a particularly great film, the themes and ideas that Carpenter built it upon are not only clever, but in today’s time, more meaningful than ever. He himself has said that the film was a response to the growing capitalism, Regan era, and right wing messaging of the 80’s. As the country finds itself once again led by a particular message and theme, it feels that Carpenter could create a They Live remake which might even be more relevant now than during its original release. Also, taking that original idea and bringing it into a modern, social media ridden world could even take the film from camp to something more powerful.

2. Within Carpenter’s They Live world, we’ve become a city of unknowing zombies, aimlessly following ads and what we’re told. The main messages being ‘Do not question Authority’, ‘Marry and Reproduce’ and ‘Obey and Submit’. The movie came out in 1988, yet the idea of a greater power telling us not to question anything and go with what we hear is eerily relevant in our current world climate. Sometimes movies are an escape. Other times they’re there to creatively shine a light on something real or important. In this case, in a world riddled with fake news and crazy leadership, could there be a better time to address it in art than with a They Live remake. 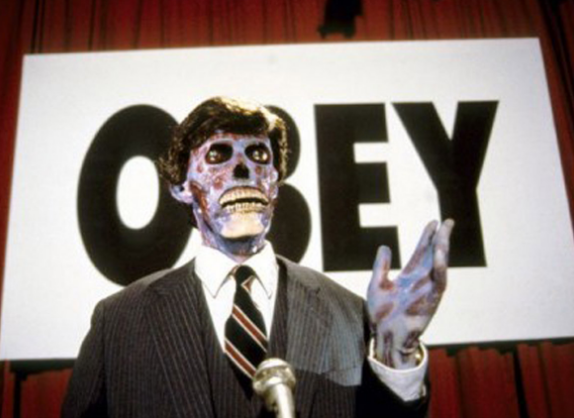 3. Our current wrestling turned movie star isn’t anything like Roddy Piper. He’s the Rock, and not only did he transform into an A list super star, in this case, he actually turned out to be a terrific actor. One who has already proven he can lead any action movie with strength and charm. Watching They Live, I can easily re envision it with Johnson at the helm, and the strength of the performance has no place to go but up.

4. The most important symbol of  They Live is a pair of dark glasses. When protagonist Piper, (who remains unnamed throughout the movie), finds them and puts them on, he accidentally stumbles into a worldwide conspiracy happening right in front of him. Society around him, thought to be normal, is suddenly exposed. Billboards, newspapers, and ads now only show their actual text. Earlier mentioned messaging that instructs us to ‘Obey’, ‘Submit’ and ‘Consume’. People on the streets, and on TV are revealed to instead look like scary creatures devoid of skin, and having only a skull with huge, creepy eyes. Even this turned out to be somewhat of a foretold statement. In today’s world, humans are not relegated to one way to view the world. We have filters and apps that can instantly change our perspective. Perhaps in the They Live remake our star could be the one to see the world as it truly is by simply looking through a particular filter.

Besides all that, TODAY is the first total eclipse of the sun in 99 years. Many will tear themselves away from their phones (unbelievably) to look up at the sky, and see their surroundings differently, if only for a fleeting moment. Knowing this phenomenon has been on its way, companies have been pushing, and selling out of total eclipse glasses across the country for weeks. More proof that Carpenter unknowingly would keep his movie relevant for decades to come. 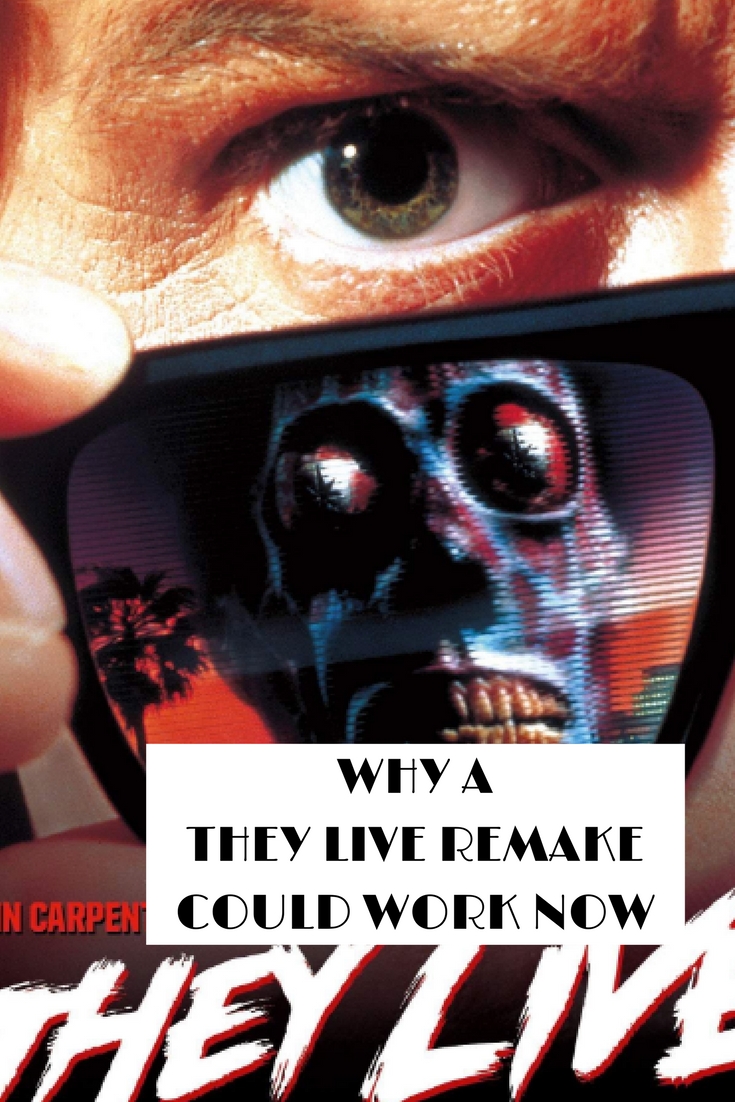