Why this Get Out Review Differs From the Rest

Jordan Peele’s first feature Get Out is not only a huge hit, but has now become the largest money maker from an African American director. It also happens to have a 99% rating on Rotten Tomatoes. Everyone around the land is singing its praises and lamenting on its fierce creativity. Similar to the La La Land craze, if La La Land starred Emma Stone and Idris Elba, and had absolutely no singing or dancing. However, while I stayed on the passionate ‘pro’ side of  La La Land, somehow I find myself on the other side of this one. Though I absolutely enjoyed the movie, I can’t fully get on board with Peele’s directorial debut. (At least, not the way I did with Damien Chazelles). I do have my reasons. And it can feel weird to have a differing opinion than the masses. Though I’m open to debate, here are some reasons why my experience differed from most, and how this Get out review isn’t quite like the rest.

Get Out has some interesting things to say about race and racism. That is an undeniable fact. But while the movie’s themes and symbolism were fresh and new, the plot outline itself wasn’t, nor was the dialogue. Rather than being unique, it seemed a bit mechanical and even a bit predictable. So predictable, at least for me, that I recited half the film as it unfolded before me, mouthing out scenes before they happened.

This should not take away from the brilliant mind of Jordan Peele. When it comes to a directing debut, this review gives two very enthusiastic thumbs up, as it were. His wide shots, and focus on main character Chris are genius in many ways. As far as a screenplay however, or plot line itself, the movie feels less mind-blowing, and slightly more typical. 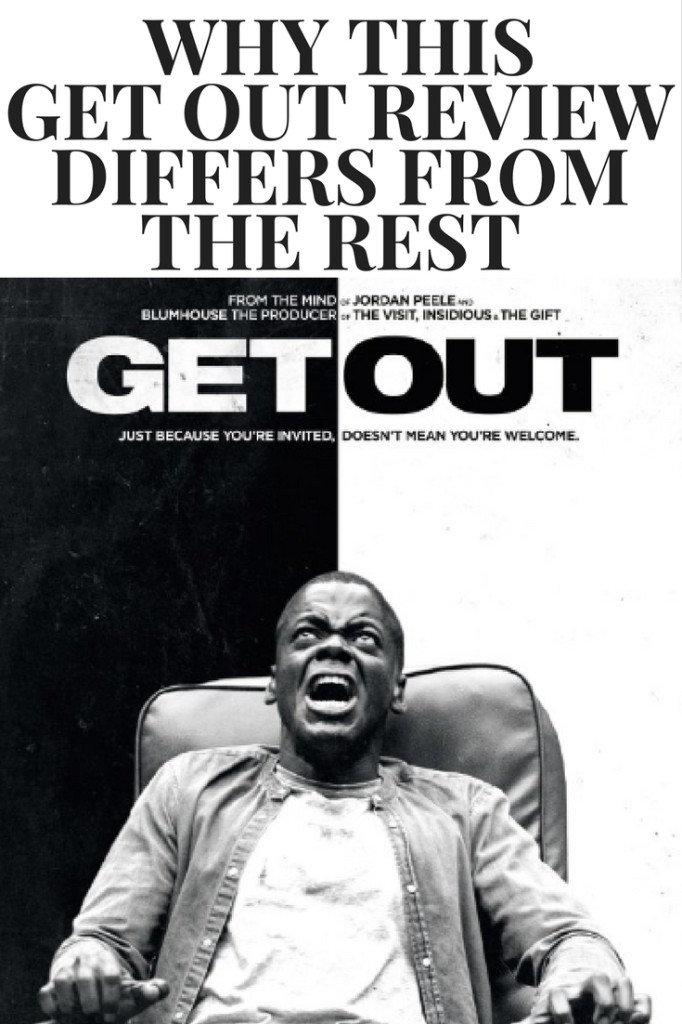 That’s not to say there aren’t some awesome elements to Get Out. Bradley Whitford (probably most well known for Josh on the West Wing) is actually brilliant at portraying villains. Though barely recognizable, he doesn’t disappoint here, even if his darker sides are more subtle. British actor, Daniel Kaluuya is great at playing confusion and disbelief, although at times he felt annoyingly unsuspicious. His eyes, widened throughout much of the film, and also an important symbol (mini spoiler!) feel genuine and sensitive. We’re going through this with him, as he navigates this strange trip home with girlfriend Rose. The scenes in which Rose’s mom puts Chris under hypnoses are not only visually stunning and exciting, but some of the best parts. Also, some of the scariest. A feeling of being trapped, or blocked from something is executed and illustrated so beautifully you feel both interested, and terrified to know more. I only wish Get Out delved into this dimension a bit deeper.

Another key element missing is the twist. Most thrillers or horror movies rely upon them, and in today’s world a good one is measured by its own discoveries and unfolding. Granted, Peele might not have intended for some huge, killer twist. Technically, revelations are unearthed to both us, and Chris in the final acts of the story. Discoveries that are meant to both shock, and challenge us.

The problem is, if you love and pay attention to this genre, you likely knew these five minutes into the movie. I did. And though the final unveiling does have some great moments, what ultimately unfolds is a version of what you already assumed.

Today, mixed relationships aren’t quite as controversial. Yet, as Get Out amplifies, the stigma can still linger. Peele himself is married to comedian Chelsea Peretti. Get Out takes that lingering and brilliantly turns it into a story that is all at once creepy, compelling, and humorous. Yet, even with creativity and conversation worthy symbolism dabbled throughout, a large part also felt formulaic, though well hidden.

To the standard viewer, this is a top thriller that clearly outshines others in it’s category and is worthy of high praise. But there’s another problem plaguing well received movies, more specifically horror movies these days, (especially to a cinephile like me); hype. And the downside to seeing a hyped movie a bit late is that you enter with super high expectations. Unfortunately, in this case, my entertainment needs were satiated but the movie buff side of me left feeling slightly short changed. Perhaps a large part of what makes this Get Out review so much less accepting than the others.