In Defense of a Happy Girls Series Finale

Back in 2004 one of the most amazing shows ended on a high note. A surprising (but not) Paris love story which followed our well dressed protagonist down the street before being reunited with her true love. The same one who adored her, took her for granted, tortured her, and when it counted most, won her back. At the end, our lead got her man; or Big. Her besties also saw their stories end with happy relationships. At the time, many were enraged by Sex and the City’s finale. How dare everything come together, some thought. I can’t believe a show that ushered in a history of honoring sexy, stylish, single, city women would end with everyone being in relationships! But not me. Some lamented about the sexism that seemed to take over their favorite show in the end, but my thoughts couldn’t have differed more.

Now, as another historical show about women, or Girls, comes to a close, we’re left wondering, how will it end, and what will become of our girls??

Much like Carrie, Hannah’s true love barely gave her a glance, or a return text in Season One. Similar to Big’s non commitment attitude which continued sporadically through the series until the end. At one point Big even leaves for a more conservatively beautiful woman, just like Adam. In their finale, Big comes to Carrie one last time before Paris. “You can go up and down this block all you want because I don’t live here anymore”, she defiantly yells. Sunday, before his own big confession, Hannah yells to Adam, “What are you doing on my block??” I know these girls aren’t those girls, but it felt a little reminiscent. I see similarities that come through in the stereo typical, yet true ways; when dealing with relationships, and love.

In this case though, it’s not clear if our protagonist will have her happy ending. For most of ‘What will we do this time about Adam’, it looked like Hannah might get the whole package after all. And you know what, I liked it, I admit. Despite much of the episode feeling almost like a dream sequence, it was nice to see her, and even Adam happy. Even if it was inside an unsustainable bubble.

In Sunday’s episode, after a bodega confession led to a sudden whisking away of reality, our favorite weirdo couple had seemingly reunited. Except for the fact that one’s pregnant, and the other, living with her best friend. But as Adam and Hannah shopped for baby items, talked about a house, and made plans for the future, the fantasy day slowly turned more realistic. By the time full realizations had set in, during an emotional diner moment, Adam was going back to Jessa and Hannah was headed home alone. So where does this leave us?

At this point, a perfect tied in a bow ending seems unlikely. After Adam confessed his reignited passion, or at least a need to help her raise Hannah’s baby, Jessa quickly headed into a downward spiral. This included hiding her feelings, hooking up with a random in a bar, and finally, admitting pain to herself. She is in love, it turns out, after all. But before all that, she throws up. It’s unclear whether this was purely emotions or something else. If it does turn out to be ‘something else‘ that will surely be a confusing turn of events. Last season, I was sure the show would end with Adam and Jessa raising Semple together. Though I had since nixed that opinion, Sunday’s episode led me potentially back down that path. Perhaps I was onto something here, except the baby they raise will instead be their own. Now that’s an interesting ending.

In normal circumstances, Hannah probably wouldn’t have accepted Adam’s new outlook so willingly. But vulnerability can be tricky, and when he provided hope for a stable future, she jumped at the idea, even if it was idealistic. But is it SOO wrong for Hannah, or more importantly, for us to want that happy ending? The one Dunham teased us with on Sunday (no matter how random, or improbable it was). Dunham’s teased us with cliche storytelling before. Back when a messed up, q-tip wielding Hannah was being scooped up by Adam movie scene style. He saved the day by saving Hannah from herself. But that was then. Now, the issue extends much further beyond punctured ear drums, and it’s clear that this Adam, while he might have grown up, (as he declared to Hannah earlier in the day) isn’t exactly her Prince Charming. At the end of Sunday’s episode, we accept this almost simultaneously with Hannah herself. Even if it did take a while for me to fully understand. Perhaps because I didn’t want to accept what Hannah already had.

So what does happy ever after truly look like for our Hannah Horvath? We’ve watched her go from self centered, lost, millennial mess to slightly less messy, more mature and even a bit empathetic. These last few episodes we’ve seen a subtler Hannah. One conflicted about the road ahead, but pondering it instead of complaining (which we’ve seen her do over much less serious matters). “I don’t want an abortion, it’s called having feelings!”, she yells at Elijah. Pretend life with Adam seems right until she catches an image of a mom and baby on the side of a product. Staring into the unknown abyss of motherhood and the reality of what lies ahead, she’s stoic. Later, back at home she’s not freaking out, not crying, not wondering what Adam’s doing. She seems alone with her thoughts, although technically, not alone at all.

What about our other girls. Will Marnie finally, FINALLY get some self reflective perspective? She was absent from last week’s episode, but I would imagine, not very missed. Will Ray wind up with Shoshanna’s old boss who seemed like his perfect match during their own dreamy day? What about Elijah? In the Girls final season he’s not only a focal point, but, someone we’ve come to care about. Now, Dill might be back, (he made a mistake of course) and Elijah’s primed to take on a whole new career on Broadway.

I’d imagine that the passionate, dissecting fans of the show are ready to pounce on the Girls series finale no matter how the final scene plays out. And if history repeated itself, I’d also imagine a happy, cliche ending for Hannah would potentially upset many. Perhaps exactly why she chose to instead, fake us out with Sunday’s seemingly positive episode.

But must the absence of Adam equate to an unhappy ending for Hannah. Although Hannah, and Lena have always been strong advocates of female empowerment, sometimes we want, or even need a little cliched, happy ending, in whatever form that comes. Not because I’m anti-feminist, or think men and, or babies are the ultimate key to happy lives. On the other hand, acknowledging a desire for those things is okay too. And if Dunham chose to end Girls on a positive, (or even a few cliched) notes, I wouldn’t protest. Rather, I’d totally embrace it. Because I’m, in fact, very much in favor of a Girls series finale that ends on a high, happy note. Just like I was gleeful watching Carrie end up with Big, (to the annoyance of others) almost 15 years ago, I’d love to watch Hannah, (and all them) get their own, happy endings. Here are a few thoughts on why you should embrace this too. 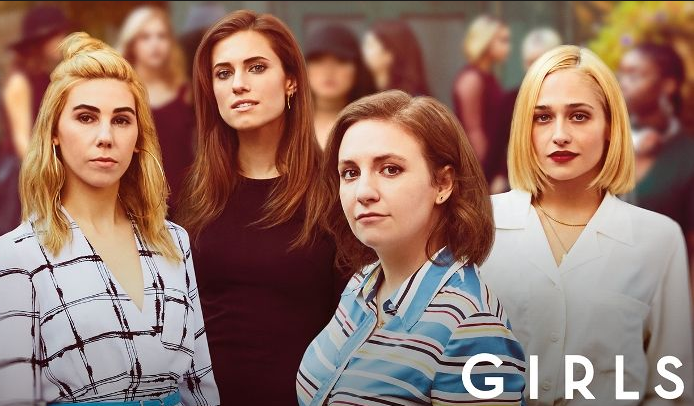 1. Hannah’s life doesn’t have to include Adam to be happy. When the Cheers series finale aired in 1997, it famously upset thousands of its loyal viewers with it’s less than happy ending. Rather then getting the girl, getting married and riding off into the sunset our protagonist goes back to tend to his one true love; his bar, alone. Satisfying to some, but depressing to others. In a similar vein, perhaps the ultimate ending for Girls is Hannah winding up with her one true love too. But instead of being Adam, Paul-Louie, or even Elijah, it’s her child. Late twenties, single mom in Brooklyn might not equate to the ‘happy ending’ most are used to seeing. But maybe that’s the ultimate twist for a show that loves to be cynical. An unconventional love story, not between a guy and a girl, or even a guy and a guy, but between a mother and her unexpected child. Maybe….

2. Elijah’s trajectory is life imitating art, imitating life. Elijah is literally following his own real life footsteps. Meaning, he’s primed to become a Broadway star. Maybe in a Girls movie, he would even be starring in an HBO series, like the meta themes currently being explored this season. I don’t know if him and Dale will wind up together but either way, Elijah’s future is looking bright.

3. No matter what, it’s not a typical happy ever after. If Paul-louie suddenly decides he wants Hannah, and HIS baby, you have a whole different kind of angle. Certainly a more positive Hollywood style outcome than Hannah, or the viewers are used to getting. Even if it does end that way though, the road leading up to it certainly wasn’t paved with gold. While I don’t see this necessarily being Hannah’s destiny, again, I wouldn’t even hate this ending. True, in many cases, his originally nonchalant response might just stay that way. But, sometimes, every once in a while, real life can deliver a cliched ending. So, if that was to happen, it’s not the craziest thing in the world. Occasionally, even if real life, things do work out.

4. Adam and Jessa probably just belong together. If like me and the characters in the show, you got swept up in the moment of last week, let’s remember something. Namely, the intense scene that brought Season 5 to a close. Two people that crazy and intense probably belong together, no matter how much history others have. Adam’s conscience said it best when he harmlessly told Hannah the difference between her and Jessa during sex. ‘She laughs a lot’, he awkwardly tells her. The moment moves along, but the subtle symbolism is there. Their love is the one that fits better.