The Neon Demon Review: All that Glitters is Cold

In Nicolas Winding Refn’s new film (how do you say his name by the way?), a famous fashion designer, played both oddly and perfectly by Alessandro Nivola tells his model companions, and us, that beauty isn’t everything, it’s the only thing. The same can be said of The Neon Demon itself.

Visually, the film has captivating moments, and beauty and sound are the most important aspects at play here. Almost to a point where it seems that Refn’s obsession with creatively playing with shots, images and time, (including some painfully long shots) was the ultimate goal, no matter the cost. Even if it ostracizes his audience, and makes for some pretty intense responses. The dialogue is corny, sometimes even purposefully so at times, while other moments prompt laughter more uncomfortable in nature than anything else. There is a story to be told here, but it’s mostly hidden underneath cinematic taunts and long, visual scenes that aim to nip at our crazier, darker side. Rather then delving into the characters, Refn instead leaves that up to the viewer. That is, if they even care. In this world, there’s not one redeemable character to care about, including protagonist Jesse played by Elle Fanning. Although Fanning is lovely, her off the charts ” it-factor” doesn’t register beauty wise. This would matter a lot less if she exuded charm or charisma, but unfortunately, that’s not the case.

But fellow model peers Sarah and Gigi, and makeup artist Ruby notice her right away. In fact, everyone notices the sixteen year old, and all are instantly mesmerized by her. She seems to exude some kind of beauty potion power, and throughout much of the film, we’re not sure if Jesse is aware of it or not. From the moment she arrives, their lives are thrust together in a medley of seven deadly signs, including vanity, wrath, and of course, envy.

There is the age old cliche about the mid-western girl who comes to New York or California to ‘make it’, and while many of them are good, as modeling agent Christina Hendricks so bluntly points out, Jesse could be “great”.  That is, if the modeling world doesn’t eat her alive.

Jesse, seemingly naive, and the definition of doe eyed strolls onto the screen quietly, but with a powerful ambition, and a lot of mystery. Living out of a hotel room run by the shady Keanu Reeves, Jesse quickly signs with an agency, and catches the eye of important people, all dazzled by the apparently naive beauty. But as her newfound discovery and upcoming fame threatens those around her, she becomes part of a world darker than she could ever imagine. As the newcomer rises in the modeling world, she begins her metamorphosis, fully transforming after her first runway show and a brush with stardom. But with more recognition, as Biggie always told us, comes more problems, and more haters.

Refn’s Drive, one of his most acclaimed works, could be considered a cinematic masterpiece that says little, yet speaks volumes. With The Neon Demon, you have some, similar factors at work. The film is low on dialogue; aiming to illustrate scenes instead through a haunting blend of cinematography and music. And while both those things shine in certain, stunning moments, that is where the similarities end. While Drive had you captivated by the main character, (who barely spoke), Jesse, who also says little doesn’t illicit the same reactions. Instead, her lack of ability to hold her own among the ferocious Ruby, Sarah and Gigi is bothersome, even when she finally reveals a different side; one that might not be quite as innocent and sweet.

For all the visually pleasing seconds there are plenty of potentially discouraging ones as well though. In fact, several people left the film early, and that doesn’t happen often. Ultimately, The Neon Demon is a movie, or an amazing, 2 hour music video about vanity and envy gone awry. Perhaps the same thing can be said of the director and real life making of the film itself. Right down to the opening credits which are stamped everywhere with the director’s initials. 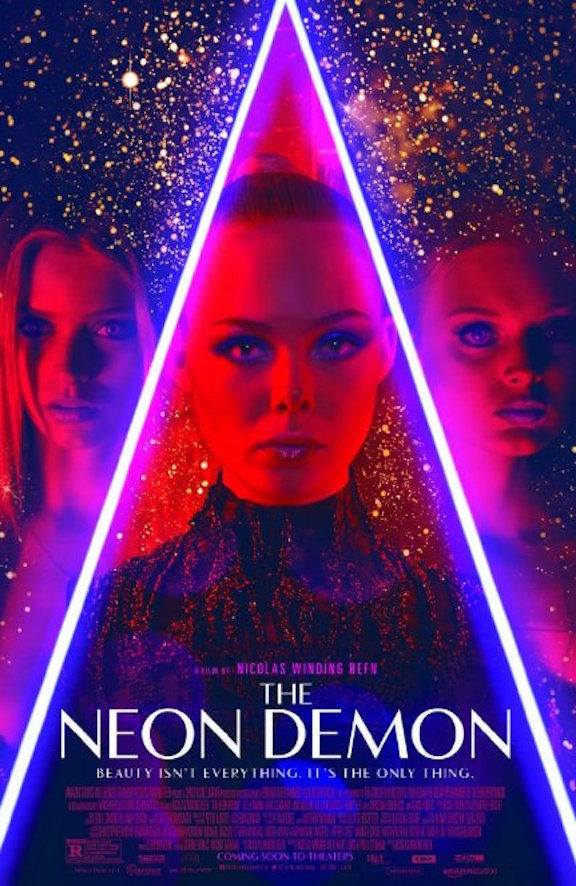 The Neon Demon is in theaters now. Find your local showing. 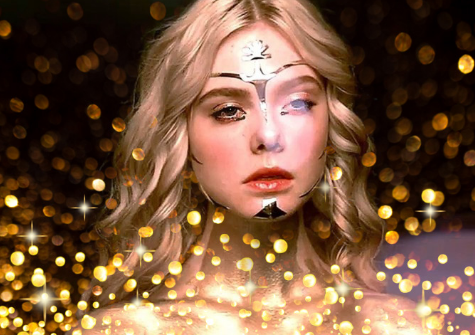 more at theneondemon.com – click on pic to see more