There has been much talk about the Suspiria remake. Everything from symbolism, to sound and the cast. The response has been somewhat split. Not surprising with a film, and ending like this one. One thing I haven’t seen discussed much is the topic of Suspiria style. It’s actually one of the most important parts of the film. Not the look and feel, which is very stylish. But the actual fashion. Looks that seem simple but play an important role in the telling of this film. In fact, almost all of designer Giulia Piersanti’s Suspiria wardrobe was custom made. She drew inspiration from sourcing old films. Everything from the 1981 thriller Possession to Ruth Gordon’s caftan style in Rosemarys baby. A film with its own clear parallels to Suspiria.

Let’s delve a little deeper into the world of Suspiria style, and what it might mean.

When we’re first introduced to Susie (Dakota Johnson) she resembles a mix between dancer, and couch dweller. A non distinct gray sweatshirt, and sweatpants. I wouldn’t be surprised if we started seeing simple, gray sweatshirts on the runway soon. As we’re further introduced, she has a look which can only be described as amish chic. There is mention of her Mennonite past which we see in flashback snippets. When she arrives at Markos dance academy, she’s buttoned up and innocent. An oversized, dark colored work shirt literally stuffed into overalls which appear to be corduroy. 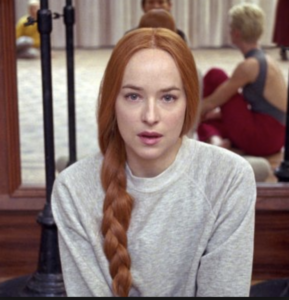 However, as the movie progresses, we start to see Susie, and her style evolve

Everything in the new Suspiria is stylized carefully. From the decision to keep it in the 1970’s to a brilliantly done kitchen scene. The coolest example can be found in both restaurant moments. The first time, Madame Blanc (Tilda Swinton), and her group of ladies are congregating for dinner in a loud, smoky, neon lit cafe. It makes you want to jump in, light up, grab a espresso and join them.

The second time, the entire dance company is at a long table with Susie at the helm. The little girl lost vibe is gone. She’s confident and powerful, which shows through her demeanor. More importantly, through her outfit. A long black, flowery maxi dress buttoned up to the neck with slit sleeves. Resembling something we might see on a Louis Vuitton or Gucci runway.

Designer Piersanti said patterns on that dress (and other pieces) originated from reviewing Louise Bourgeois drawings which she reinterpreted. Upon closer inspection, flowers and other designs were actually derived from images of body parts including legs, arms, and breasts. Susie exudes a coolness that only comes from knowing you’re the most stylish woman in the room. And foreshadowing some of the power that comes from that knowledge. (But no big spoilers here.) 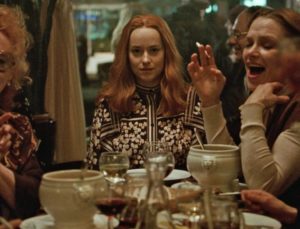 Most of the Suspiria style is centered around movement.

Flowy dresses, and oversized caftans and tunics. They might seem frumpy or matronly in a Kardashian obsessed world. But these vintage inspired outfits are the opposite. They’re feminine, and freeing. When we meet dancer Sara, (who is already starting to question the dance academy) her style sticks out too. One of the first things we see her in is a oversized, pink, flowery robe. Something Joni Mitchell or Elizabeth Taylor might have worn while lounging. Simple, yet with an air of  sensuality. What is hiding under that massive robe? 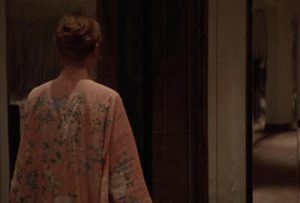 Much of this style we see from Madame Blanc. Long tunics, and monochromatic outfits. Including a dark grey turtleneck and maxi skirt. Outfits that are almost more of a uniform than an expression of style. Most notable, her blood orange colored robe/dress with intricate drapery and oversized bell sleeves. It evokes feelings of a 70’s socialite a la Halston. 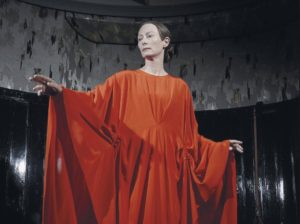 Red is also an important symbol in the Suspiria style

Red has been known to exude power. One of my favorite references comes from (of all things), a Law and Order: Criminal Intent episode. Detective Goren (Vincent D’onofrio) asks a woman questions about a suspect. At one point she tells him, “She wears red when she wants something.”

First off, Susie has light red hair. When the dance company finally performs their dance, called Volk, the girls are clad in red, bandage style pieces with long, braided, hanging ropes.  They’re sexy and mysterious at the same time. Showing skin, but still leaving you wondering. And it’s not a coincidence that the style evokes thoughts of dripping blood. 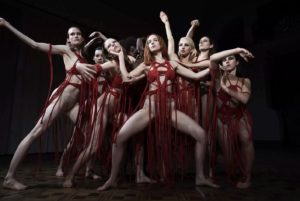 In the climax, and insanity that is Suspiria’s final act, Susie has completely transformed. Both stylishly and metaphorically. Her buttoned up look is gone. This style had been quietly evolving throughout the film. From the aforementioned restaurant scene to Sara’s pink robe which we see Susie wearing later. By the end, her metamorphosis is complete. She dons a dark colored, sheer nightgown with major 70’s vibes. It shows us someone who is cool and confident. She’s taken the idea of Madame Blanc’s looks and transformed them into a style oozing sensuality and power. Wearing the sexiest caftan I’ve ever seen she is a woman that is both comfortable with her sexuality, and unafraid to flaunt or use it. What could be more powerful than that?