My husband’s leaving me this weekend. At first I wasn’t thrilled, but I’ve resolved to accept it. It’s not another woman, nor is it a mid life crisis worthy of a big purchase or misplaced introspection. His journey will take him away from me and into the arms of a man. Well four men to be exact. Mike, Page, Jon, and of course, Trey. The truth is, we have somewhat of an open marriage. He’s in love with me, but he also loves a band called Phish and most of the time, I have to share him with them. I knew what I was getting into from the beginning. I condoned it, even partaking much of the time which not only set the groundwork but seemingly made me even sexier. Now as the cult, I mean band prepares for their insane 13 show run this summer, The Phish bakers dozen I’ve made terms with living alongside the boys instead of fighting them.

We exchanged vows almost six months ago but now he had to go back and fulfill vows to his other love, alongside hundreds of other devotees. People all there to honor, support and obey till death do they part. There are a sect of women (and men maybe) who deal with this condition on not a seasonal, but year round basis. They come in a variety of degrees yet all have one thing in common. They’re in love, or married to a phish head.  Some lament over their spouse’s ‘religious beliefs’. Others love their partner so deeply they’re willing to show any level of support when needed. It doesn’t mean they’ll convert, but they’ll drink the juice when coerced, on occasion.

So what does it mean to love and marry a phish head? It’s accepting that some elements of your life will inevitably change. It also means learning how to embrace, somewhat, that which doesn’t interest you. It might lead to knowing when to let go at certain times. But it will, without a doubt mean that you likely have to endure (on some level) the Phish bakers dozen which starts Friday July 21st at MSG. If you find any of these happening to you, chances are, you’re married to a phish head too.

I first learned about all this in 2012. My now husband didn’t resemble the hacky sack throwing, dreadlocked students I remembered from school, but he was clearly addicted to the music. I knew nothing about Phish except former stereotypes. Little did I know that eventually, i’d be immersed in their wacky world. The phish-dom is kind of like the Godfather. Once you’re in, you’re in. And if you fall in love with a phish head, you inherit all ties by association. They’re a certain group of people who share a complete sense of loyalty, trust and camaraderie. A circle that never falters; loyal followers somewhere between cult and devotion. And they write about their cult leaders online and in group boards obsessively and intensely, dissecting set lists and songs like surgeons. To me they were more urban legend, like some sea monster you’ve never seen but knew existed. In college I saw them from afar but rarely engaged. Now here I was with one and trying to make him happy. I’d even attended one of their Jones Beach shows in a massive hurricane with water up to my knees. Five years later, I’m still willing to be that ride or die chick as far as the fabulous foursome is concerned. But even this dutiful phish wife was faltering at the announcement of the Phish Bakers Dozen at MSG in the summer of 2017.

When I asked how many he planned to attend he both nonchalantly and excitedly told me all 13. To clarify, in some attempt, (in his mind) to soften the blow he reminded me this wasn’t in a row but spread out over two weeks or so. There was no question here. No, can I run this by you and see your thoughts. This was a straight up statement letting me know the Bakers Dozen was coming and he would be right there praying to his gods.

At first, I was a bit incredulous. Then I thought, if THIS was the worst four letter P word I’d ever find in his Google search, far be it from me to take that away from him. (Not that I ever could.) Having passions is important in life, and letting your spouse partake in theirs; imperative. So I gave my blessing, believing myself to be only a tiny component of this puzzle, and not a actual piece. Unaffected, I was a nonchalant spouse humoring her husband. That was until my plans started to roll in. A reunion weekend with a group of friends had to be nixed as it fell in the eye of the Phish storm. Then there was the family vacation we’d also have to decline. Suddenly the summer shows I was somewhat removed from were taking full precedence over not just one, but now two lives. It had already taken much of his attention away from me anyway. Endless evening hours spent on the Ipad I bought him only made his Phish research easier and more mobile.

Like any good wife, or Phish wife in this case, much of life is defined by the battles you don’t pick. While the notion of two straight weeks of non stop Phish, and saying no to plans didn’t sit perfectly well with me, it seemed I’d have to let this go. A few tips for dealing with your own phish head’s activities and announcements. Try not to care too much. Life is short, and not worth battling over the Phish bakers dozen. On the other hand, make it clear that while exciting times, this is NOT NORMAL. Just like the leader of our country, we shouldn’t get too comfortable or settled with these types of behaviors. This is a special occasion and should be treated as such.

That being said, I will be partaking in a few shows for good measure. The rest of the time I’ll be using to reconnect with me, myself and I. Even though it’s imperative for phans to survive the Phish bakers dozen, we actually need to survive it too! Plan out some girl time. Use your husband’s hiatus from normal weekend life to catch up on things you maybe wouldn’t normally get to do.

Rent a chick flick, the one he refuses to see.

Go to sleep earlier. He won’t be coming home till past midnight anyway.

Enjoy alone time. It will be gone soon so embrace it, and use it wisely.

Check out Phish yourself.

The saying goes, give a man a fish and he’ll eat for a day, teach a man to fish and he’ll eat forever. The same, I’ve decided can somewhat be true of Phish wives or girlfriends. I’ll never grow dreadlocks, and I may be one of few girls at Phish who got a blow out that day. I love Jay Z , I only wear tie dye once a year, and I will never be a phish head. On the other hand, some nights when the music wafts from the speakers filling up our living room, I find myself jamming along. Even partaking in a dance party or two. I can quote a Phish lyric, or recognize a song and instantly make my husband smile with pride.

Give a phish wife a concert ticket and she’ll jam for a night. Teach her about Phish and your passion, and she may just jam forever. But no guarantees…… 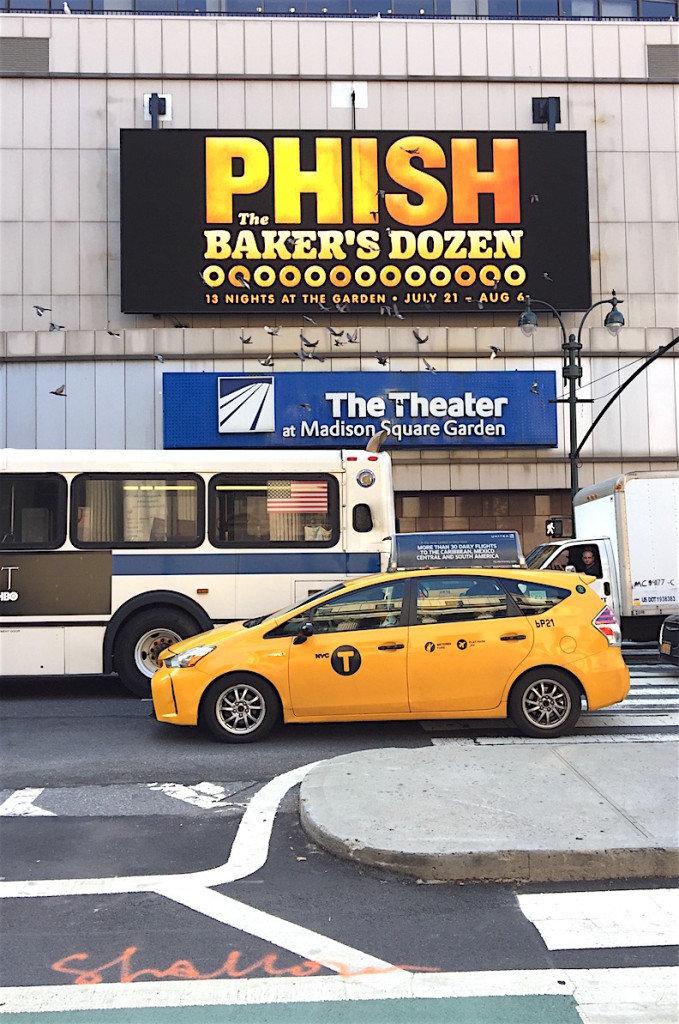