Mother! Movie & Why we Need Films that Challenge Us

I finally saw Darren Aronofsky’s latest, Mother! Deemed divisive to say the least, the psychological thriller has been both lambasted, and highly praised by critics, bloggers, and viewers. Having read several tweets that said going in eyes closed would be best, I decided to listen. I’ve seen pretty much every horror movie under the sun, and consider myself a movie buff, lover, and guru. So, when I went into Mother!, I had no idea what I was getting into at first. When I left, though what rattled inside me was intense, one thing was clear. No matter what people would think of it, Mother! is an important movie.

You might have already heard various things about Mother! movie. Since it debuted to very mixed reviews, deeper ideas have come up in both conversations, and interviews with the star and director. If you haven’t heard much about it, here’s the bare bones description. A couple living in a newly restored house in the middle of nowhere has their life uprooted and distraught when visiting strangers end up staying with them. But the most important thing to know about the Mother! movie, if you see it, is that this isn’t the typical movie going experience. One where main characters are fully fleshed out, and things happen in a timeline. One where names even matter at all. In fact, in the film no one has any. Our protagonist herself is merely known as mother. The house doesn’t have any garage; no road leading up to it. Because it’s meant to represent something much more than just a house. In fact, turns out that everything in the Mother! movie is meant to symbolize something else. Even Jennifer Lawrence’s natural beauty and farm house chic style, right down to the beige color palette. The way she effortlessly works on her house, testing out paints in perfectly cuffed boyfriend jeans, and exploring strange sounds in a white, barely see through linen nightgown. 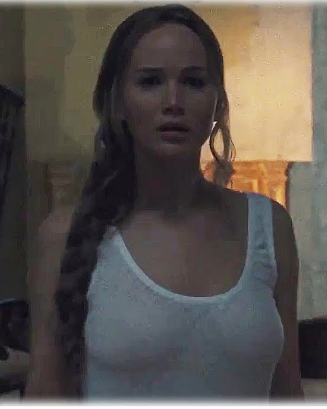 Aronofsky and Lawrence have also spoken out about the movie’s symbolism; stating that essentially it’s a cautionary tale about Mother Earth and what we can and have done to it, and ourselves. He even went on to fully explain the biblical references, and their pertinent meanings, in sense explaining Mother! movie as a retelling of the old, biblical story, right down to Cain vs Abel. The New Yorker spoke to a deeper meaning. An allegory on fame, and the depths that the male artists will go to, and put a muse through, to produce and create. Ironically, Aronofsky’s muse in the film, Lawrence, also became his girlfriend during filming. Proof once again, that life can imitate art. 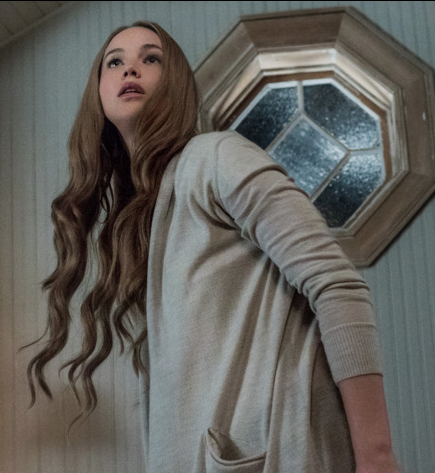 There were parts of Mother! that were quite literally hard to watch. And still now, they’re sitting inside my head. This comes from someone who felt the need to own the DVD of Last House on the Left. (the original, of course). For that reason alone, I can’t recommend this film to ALL. Despite what I might feel about the art of movie making, or the conversations a film can illicit, the simple fact is, not everyone is up for this kind of thing. Even the movie lover themselves have to be really into long, deep chats about cinema and various film symbolism.It’s the only way you can really work through the Mother! movie after seeing it. Upon leaving our showing, we headed straight to dinner and spent the next two hours slurping pasta, dissecting every moment we’d witnessed. Those types of conversations aren’t in everyone’s wheelhouse. And that’s totally okay.

But regardless, Mother! remains an important film in movie making as I see it. It tells a familiar story whether we choose to listen or not. One that might mean slightly different things to different people. But one that’s depicted both beautifully, and brutally. A film that proves Michelle Pfeiffer can harness the power of mystery and intrigue just by looking at us the right, or wrong way. The last time she slinked on screen this sexy and powerful was jumping through telephone poles as Cat Woman. Her role, just as mysterious and symbolic as everyone else. At the heart of Mother! is an important tale. One that we need to hear, but never want to talk about. The way we treat each other, and what can happen when we take people, and things for granted.

At surface, much of the film feels misogynistic. You can’t help but hope for some inner Katniss to come out while watching a lame Lawerence quiver and deal with the circumstances unfolding around her. Lately, movies like Atomic Blonde, and Wonder Woman have propelled the feminist movement forward and given us some strong, female models. With all that recent power, Lawrence comes off pitiful in comparison.

The brutal irony is that inside all that quietness, and brutality, is an actual reality. One where women continue to be oppressed, suppressed, taken for granted, and even stomped on. They make the house nice, have babies, and nurture their spouses while the man grooms himself for future greatness, all the while ignorant to her work. A world where we ultimately couldn’t bear to elect a woman, so we elected someone else instead. So, while it may feel awful to watch a glowingly, confused young woman systematically go through a series of built up tortures, it’s not Aronofsky’s story. It’s our own; the one supposedly told from the very beginning.

Truth be told, if you look deeper in, you’ll see that attempting to compare this to anything else you’ve seen won’t serve you very well. For much of life, we go through it eyes closed. The Mother! movie in a sense is about what can happen when the world,  a spouse, or your creativity does exactly that, and how the ones we love end up paying for it.

Although you may have to technically shut them in some scenes, Mother! is in many ways, a masterful eye opener.