The moment Mandy opens, you can tell it’s going to be something different than you’re used to seeing. A quote, followed by a thick, gothic red font, and strong, disturbing music opens the film. There, we’re introduced to Mandy and Red. A quiet couple living in the woods of the Pacific Northwest in a simple home with an amazing bedroom. The time is 1983. It’s hard to write a straight forward Mandy review, because this is not a straightforward film. It’s one where fantasy and reality collide, and artsy imagery is formulating at every turn.

Read on for more Mandy Review…

Mandy is earthy, with a simplicity and a sadness. She loves heavy metal, vintage heavy metal band t shirts, dark books, and runs the local general store. When a cult driving through town crosses path with Mandy, their leader decides he needs to have her. The cult is a group of not very charismatic, back woods type people. Jeremiah, the leader evokes memories of Buffalo Bill. But one thing they do have up their sleeve is the ability to use their shofar like tool to summon the demon bikers living within the quiet woods. Once they do that, they use them to help kidnap Mandy and Red. After they torture him, and kill her, they flee the scene. But this is only the beginning.

Red is about to free himself. And when he does all hell will break loose. Nick Cage isn’t only going to go after the bikers, and cult members who killed his beloved Mandy. He’s going to go all Nick Cage on their ass in the most darkly, sadistic, funny way possible. Beginning with a scene that epitomizes some of Cage’s craziest facial expressions and notable movie moments into one bathroom scene. After setting himself loose from the wires that bound him, he downs a bottle of liquor, stumbles around, and screams a lot. After wallowing in agony for a moment, he goes out to wreak havoc and get revenge on those who wronged him and Mandy. And it won’t be pretty.

Mandy is a thrill ride with a familiar context, but a unique vision. Director Panos Cosmatos uses color, animation, and scene blending to make Mandy feel as symbolic as possible. And in many cases, it succeeds. One particularly successful example; the way the color red transcends from one scene, bleeding into the trees in the forest Red drives down. Other subtle, symbolic references and homages are scattered throughout the film. Including a mention of the nearby woodsy area as Camp Crystal Lake. And a brief moment where Red and Mandy are watching the ’82 horror movie Nightbeast.

Scenes with cult leader Jeremiah feel like a hallucination of color and sound. Though the idea that a cult could kidnap you from your quiet home is harrowing, he almost feels more odd than truly scary. What is scary, and fascinating are the demon, deformed, spiked biker gang that live in the woods, and are summoned by Jeremiah and the cult. They’re frightening to look at, and unclear to define. Are they real people, demons, monsters? And how did they get this way? All we really know is that at some point they were given a bad batch of LSD that seriously messed them up. They’re one of the most interesting (and scary) parts of the film. But unfortunately we never learn their origin story. Or, how they linked up with Jeremiah. Though they are terrifying, and powerful, they prove to be no match for an angry man out for vengeance.

Once Cage begins his revenge path, the movie moves fast and never lets up. Part of that quick moving, bloody action is what makes Mandy run. But what’s actually more enticing is the first half of the movie. Mandy herself has a cool, mysterious, and brooding nature. Long, ravenous dark hair, big eyes, and a scar on her right cheek. We don’t know much about her, or their past as a couple. Although a quick flashback tells us their love story likely began with a glance at a busy bar. Ultimately, it’s that love story that is the basis for everything interesting, and horrifying that will happen in Mandy. 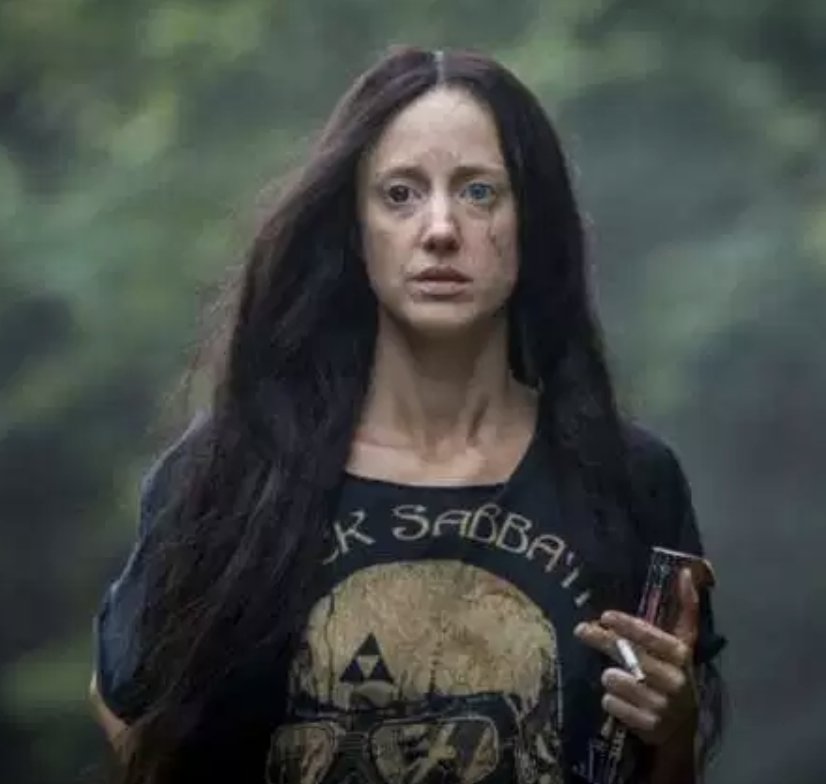 what did you think of this Mandy review? Have you seen, or heard of Mandy yet?

Mandy is currently playing at Alamo Drafthouse and other theaters.