I’ve been in love with someone for 25 years, but we’ve never met. It all began in 1990. A young man, fresh off a stint at Remote Control (if you think this is the device to work the TV you’re too young for this one) was starting a gig at Saturday Night Live as a featured player. I still remember his adorable face staring at me (just at me) from the screen as the voice over announced his name. That was it. My AOL email which I excitedly received around the same time (yes AOL!) was proudly made Adamschick66. A borage of collaging began as Adam cutouts filled my walls and notebooks. They’re all Gonna Laugh at You, his first comedy album was one of my first cassettes. I played it so much my Walkman broke. All this culminated in a bold move by a young, obsessed tween who also happened to know her mom’s friend worked on SNL. Since tweeting wasn’t an option, I wrote Adam Sandler a love letter. The note described my feelings, danced around the fact I knew where he worked and concluded, if he didn’t reply to me I’d come down to the studio and get him. I might have added, ‘and kill you’…. I was clearly joking. Today, someone would probably throw Adam from harms way to inspect, if the note reached him at all. Back then, he was just a funny guy trying to start his career and fan mail was an exciting prospect. Several weeks later a large flat envelope arrived in the mail. I ripped it open to find Adam staring back at me from a 8 x 10 glossy. Scribbled in black sharpie across the picture read: Dear Blake, Please don’t hurt me!! Love Adam. Unbelievably, that was 25 years ago. Now, 36 and married, just like Adam, I’ve grown up..sort of. But last night, at the Here Comes the Funny tour at the Westbury Theater in Long Island, it all came flooding back. I was ten again, screaming out for my jewish love god, Adam Sandler.

I never could quite explain what it is that makes me love him so much. Partly the silly wit; the one the rest of the world seemed to tire of, and I won’t lie, there were times in recent years, even I questioned my long time crush. But if you know real love you also know that sometimes when they make mistakes (Jack and Jill, good lord, the Ridiculous 6 which even I couldn’t watch), you have to give them a chance for redemption.

Last night during his run of the Here Comes the Funny tour, not only did Sandler redeem himself, he refreshed that twenty five year obsession, even providing some clarity on it. The show, a promotional tour across the U.S. for Sandler’s new Netflix movies, consists of his usual crew. Rob Schneider, Nick Swardson, and David Spade all perform comedy sets before Adam’s awesomely long act. At times of playfulness, it even felt like a live action Grownups with the friends. Except, much funnier.

In one of the funnier bits, (and definitely Rob’s best moment), Schneider emerges as an Russian astronaut while him and Adam serenade each other about exchanging blow jobs on Space Station 69. After messing up his stage exit, Sandler casually yelled out, “Over there Schneid-man, you don’t know where to go, do you!” One of several times Sandler seemed to naturally forget what he was doing while something happened in front of him. During the last, classic song of the show, he stopped all together when the extremely rowdy crowd started yelling. “Is everything ok?, Is someone hurt?? This isn’t a sad thing is it?” After being reassured by everyone to continue, he said a few lyrics as if rehearsing them to himself before quickly getting back into the groove. Now, that’s authenticity in it’s purest form.

The night consisted of sets by Rob Schneider (also emcee), Nick Swardson, and David Spade. All three touched upon some relevant topics including the recent United fiasco, and of course Trump. On the other spectrum, Swardson joked about controversial material before going on to explore deep issues like why we’re not bothered by the smell of our own farts, and how no adult can escape the arrival of the double chin. Spade yelling back at the rowdy (actually, annoying) crowd was also a highlight. Everyone loves a heckler getting heckled; especially when it’s much deserved. In this case, 75 % of the crowd screaming random offerings like Joe Dirt counted as such. No offense to Long Island, but the audience, by far, the worst element of the night. There is a difference between enthusiasm, passion, and stupidity.

But the highlight of the evening was the main event, Adam Sandler. During his almost 90 minute set, he performed comedy, sang little, funny, relatable songs, and best of all, gave us some classic Sandler. What struck me the most through the show though, was how different this Adam standing before me seemed. I grew up loving a man who ended his last comedy tour (which I saw in ’96 at Radio City Music Hall) with a 20 foot tall stuffed penguin smoking a gigantic joint. A guy whose main topics consisted of smoking weed, his piece of shit car, playing with his cock and balls, and respecting a talking goat.

Now, at 50 years old, I was presented with a new person. Someone who was still the same, but had also, literally, grown up. Now the topics focused on his role as husband, dad to two daughters, and generally tired dude. Not that Sandler doesn’t have some immaturity left. It also included lots of chatter about the intimate moments of his sex life, which, as someone who loves him, was not always easy to hear. Yet, even those moments helped to provide some tidbits of insight into Adam Sandler, the man. A man who’s clearly still in love with his wife after twenty years, but also can’t commit to a night of movies and simply holding each other. A guy who can talk about shoving a bottle of Vodka up his ass, (reminiscent of 90’s Sandler). Then turn around to croon about the kid whose jerky antics on his daughter’s play date sealed her own crackhead future in Bad Playdate; one of the best songs of the night.

These little touches not only speak to Sandler’s sincerity and sweetness, but provided the best moments of the Here Comes the Funny tour. There were glimmers of the old too. Funny, quick little voices in between sentences, and mumbled, notable one liners like Today, Junior had me nostalgic for the old Sandman.

However, the most memorable moment came when Adam sang a tune in honor of his friend Chris Farley, containing lyrics so touching and real it made me cry. In that moment, I fell in love all over again with the Sandman. Both his hilarious side, and this more somber, reflective one we rarely see. By the time the night wrapped up with a Sandler classic, amended to express his love for his family, I was fully back in Sandler land. A celebrity who, in spite of all that fame and fortune, was a regular dude who loved his family, his friends, and as he concluded, his fans. And since I live on an island unto myself, I interpreted that to mean solely me. The girl who he had politely asked almost three decades ago, to please not hurt him. On this night in 2017, after I finally got to look my lifetime crush in the eye, and shake his hand, it all came full circle. I’d kept my promise. I’d never hurt him, always stood by him, and had done just as he had asked of me (and the crowd) moments prior; I had, and would continue to grow old with him. 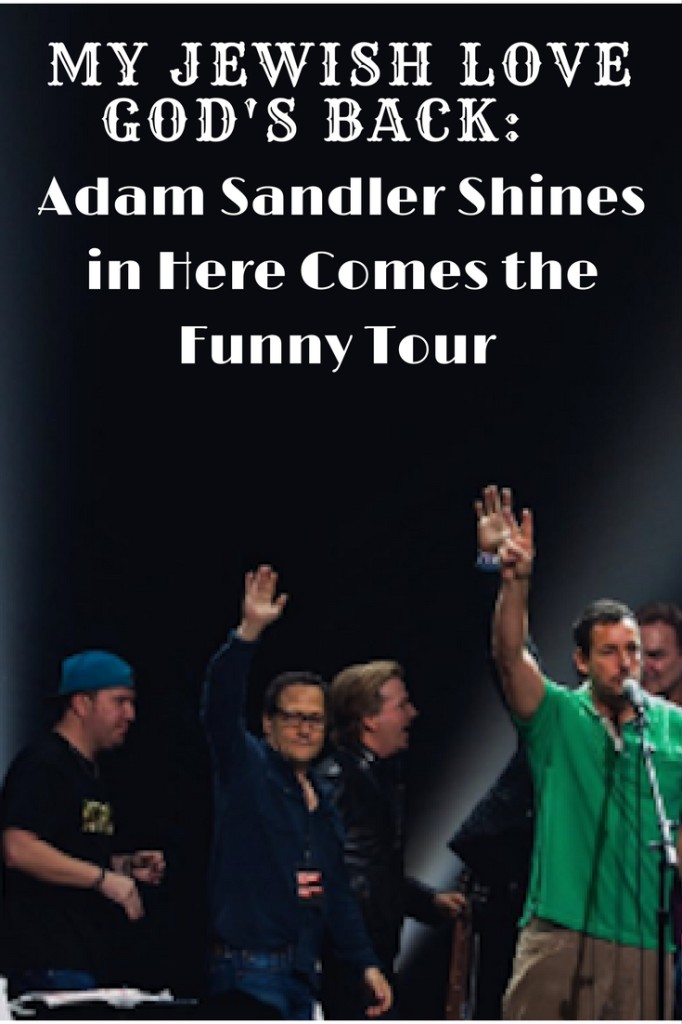 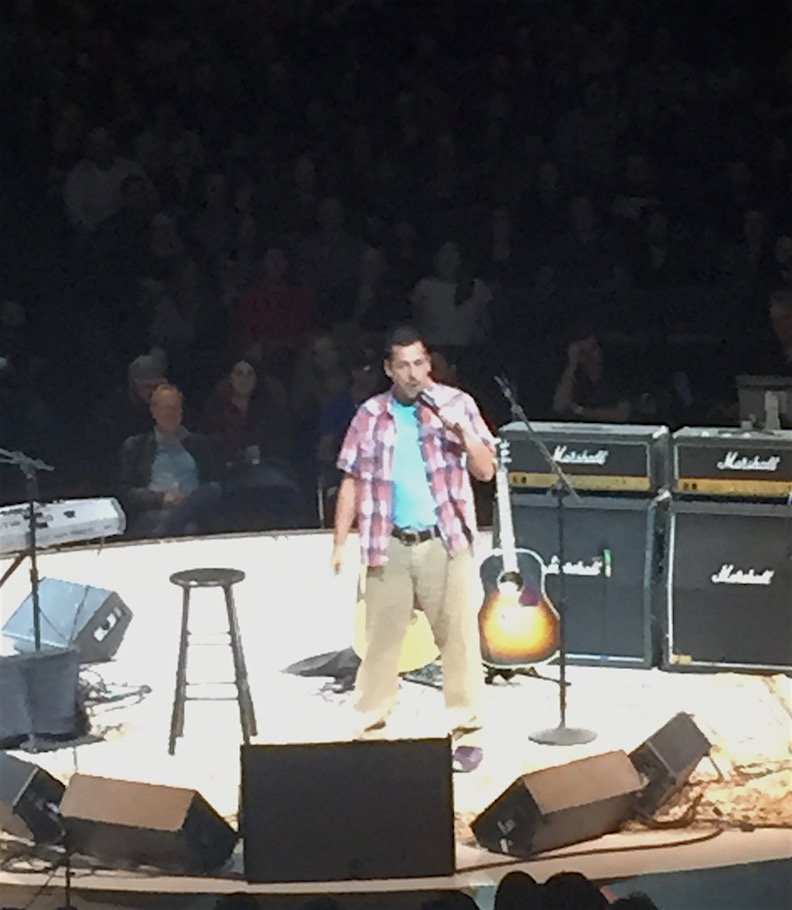 Next up, the crew moves on with their tour, which concludes this summer. I’ll be reuniting again with Adam soon too, this time on Netflix.