Last weekend I journeyed into a short trip with madness (though some would say I live there every day), and took a trip to the Barneys Warehouse sample sale. Preparing myself, knowing a panic attack was looming in the distance, I entered anyway, my friend in tow, as we prepared to attack the racks with the other animals at the zoo.

Hangers and clothes were everywhere, and at one point I held so many things that an associate came to me with a huge garbage bag- “Here you go honey, looks like you could use it” and then disappeared back into the frey, never to be seen again.

I began listening to all the things around me, all the debating, all the rationalizing, the secrets, the lies, it was like an episode of Gossip Girl. To my left was a girl and her clearly gay best friend, pouncing  on her w/ excitement that the shoes he’d been waiting a year for were finally on sale, but still so expensive. Just call your mom, call her right now was the girls’ response, tell her it’s an early birthday present, do it!!! And I can bet that he did.

All around me was whisperings of just buy it, and then tell him later, ask for it as a present, just up your shifts at the restaurant next week, just sell your body on an escort service, I heard you can get big money for letting them test your ovaries… Yes, when it comes to fashion both women AND men, it seems are willing to pay any cost and sacrifice look that good, and more importantly, have someone else seeing us look that good. That day I succumbed to this disease. In a big way, much like one might regret a decision in the early light of day when they’re walking back home, eyeliner smeared, holding their stilettos in their hand, praying a cab passes by, before they are seen by humans.

As I rationalized and debated in complete delusion with the sales girls and cashier, it seemed at that moment that the Balenciaga dress was meant to be mine. It was fate. If I hadn’t wandered into unchartered territory, putting my hands on a rack only to be yelled at the by the Barneys sales girl, who shooed me away, while saying, you can’t be back here, these ones aren’t for sale, girl, then I might never have met the dress at all. Oh, but I did.

The debate that wound up carrying the most weight was the fact that, at almost 65% off, the price was UNheard of for Balenciaga, and that I would have it forever- and of course, it was fabulous. That was all it took, and despite the fact that I was using monopoly money, and that the dress was a size 40, a logical fact in the do not buy column that somehow seemed to escape me, and everyone around me, with 1 fell swoop of my can’t be returned signature, it was mine.

Sure, I will be eating tuna fish every day for the next 3 months in a row, and I will have to cut back my wine intake, and UP my Ebay selling account, but one day, sometime, somewhere, in a land where I think I am Carrie Bradshaw, an event or party will come up, and I will be there, wearing the most amazing dress in the room. And that is worth all the tuna fish in the world. Unless I sell it on Ebay before that day comes….. 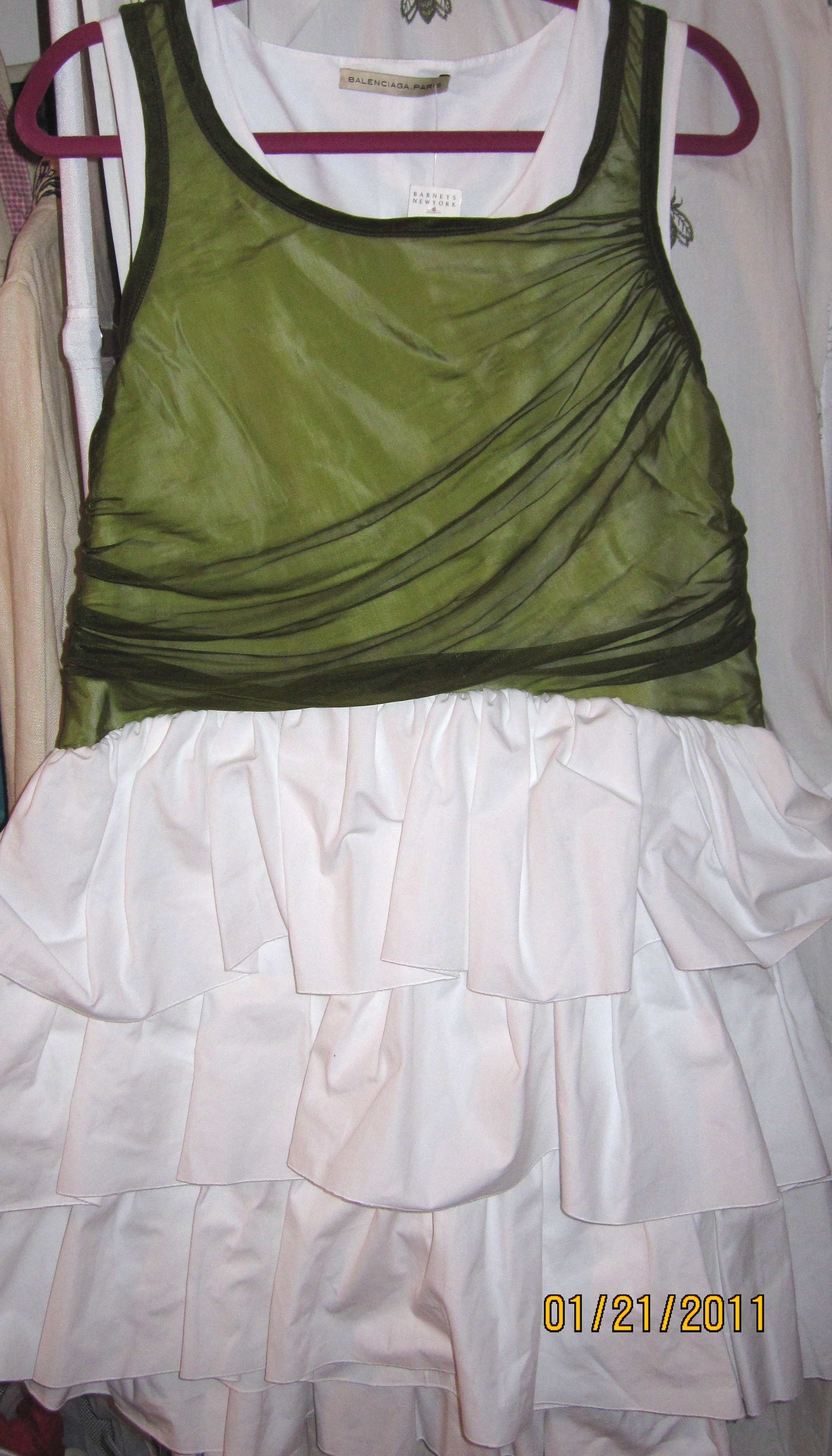