The color that has been used to describe dreariness, blah  ugly weather days, and usually when found atop a head is met w/ a gasp and an immediate covering and dyeing over, has finally found a niche.

Turns out gray isn’t so drab after all, and is having a major moment at Fall 2011 fashion week, being found all over the runway from Max Azria, to Victoria Beckham’s awesome mix media belted dresses, and Alexander Wang who even provided an exciting new accessory I want to head start for spring ’11 first- Gray rimmed fur lined sunglasses. Practical, no. Awesome, yesss.

This Amazing dress for the Alexander Wang collection, also boasting a major Gray/taupe palette is almost like a fleece and a dress in one, with silk accented bottom and if my wallet agreed, I would certainly form a relationship with it. I’m hoping the fleece dress eventually trickles down to the better market.

And in an even bigger twist, gray has not just moved mainstream into apparel and accessories. Though it had a few trendy seconds here and there last year, gray hair seems to be appearing in the limelight yet again, highlights appearing on the runway, and streaked hair all over fashion trend setters, bloggers and models. And now, the symbol of getting over the hill has transformed into a sexy trendy of the moment look- Try it if you dare- or risk being whats even worse then being over the hill….being fashionably irrelevant- QUEL HORROR! 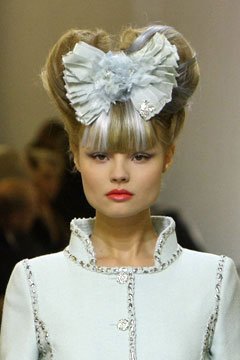