What’s old is new again. Why do I say this? The Girls finale commenced this past Sunday night and while opinions appear slightly mixed, it seemed some of my previous thoughts might ring true. In the end, Hannah’s happy ending was with a man after all. But not the man typical of cliched, happy endings. Instead, its her little man, Grover; the product of her one night stand with surf dude Paul-louis. As the series ends with one final scene on Hannah’s face, we’ve realized something with her in that moment; growth had in fact, occurred. Not that having a baby, or being a single mom equates to automatic growth. But for this girl, who at times seemed spoiled, incapable of maturity, or on her own Hannah island at times, a baby somehow seemed to do just that. Even Dunham herself said when she started Girls, she always saw it ending with Hannah and a baby. Some watching that ending might applaud Dunham for doing the non stereo typical thing, while others may think the ‘harsher’ ending wasn’t so realistic at all. Sure, the dad wasn’t around, but not all single moms suddenly get a great job and move into a giant house in upstate New York either. The opinion on whether this Girls ending speaks to the millennial mom might be a mixed one. But when I watch the Girls ending, I don’t look forward, but back. More specifically, back to a little movie I still love called Baby Boom, where the setup is different, but the lessons quite similar.

In the 1987 film, Diane Keaton isn’t a spoiled mess of a millennial. Instead, she’s a high powered yuppie executive. We’re told moments in, (in an epic old school NYC scene), she’s so tough her nickname is the Tiger Lady. When the self absorbed workaholic accidentally inherits a baby, her lifestyle slowly but ultimately morphs into a softer, successful, suburban mom.When the movie ends, similar to Hannah trying to latch in the Girls ending, we finally see the connection between new mom and child. (Although in this case, this was an adopted, not blood daughter). Though the Girls ending takes place 5 months into Hannah’s motherhood, we get to see Hannah change too. It’s clear that a connection hadn’t yet been made, causing frustration and anger in her case. Ultimately, both final scenes illustrate our protagonists finally finding their own groove, and bond.

So turns out, Baby Boom might have celebrated it’s 30th anniversary, and be a bit cliche, but it’s intent and message aren’t so archaic today. Many of the movie’s themes aren’t only still relevant, they mirror ones from the Girls finale itself. It may seem weird, but while watching, I actually saw quite a few similarities to one of my favorite films. 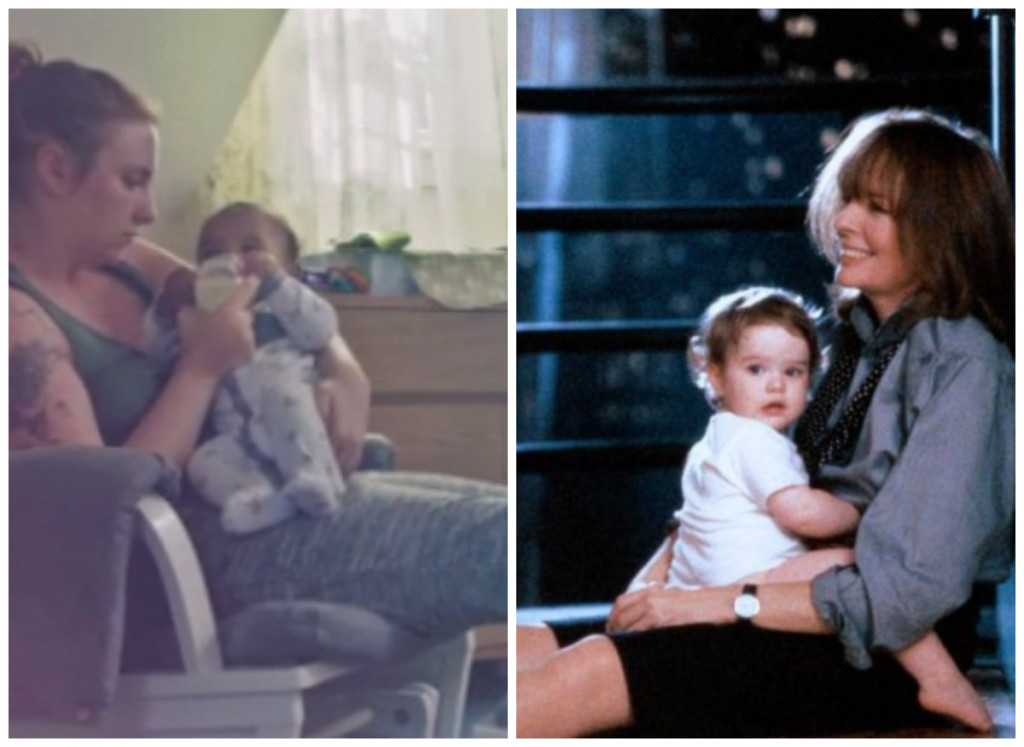 1. The message is still prevalent today. A woman can achieve success in both career and motherhood in various forms. In the beginning of Baby Boom, we’re asked, can a woman have it all? Mind you, a female’s power was decades away from what it is today. And the answer, at least according to Baby Boom; Yes. But you might not even want it. At least not in the same way. Regardless, an independent woman raising her baby without the dad was the topic explored in that movie, and the same one Dunham gave her main character on Sunday.

2. At the end, Success comes with entrepreneurship. After JC Wyatt leaves the high powered world of the city, she’s a fish out of water in Vermont. But later, she comes back victorious with her own, self made, successful baby food business. In the end, instead of choosing to sell her million dollar business back to the corporate world that burned her, she keeps it for herself. Though that quick success might only be achievable in the movies, what could be more relevant today than a new mom who wants to own her own business? When Girls ends, Hannah is close to starting her new job as writing professor at a university. However, it feels obvious, or right that later, when things are more settled, Hannah will definitely find success, maybe even fame, as a self employed writer.

3. It ends as a love story with a baby not a guy. When Girls last episode Latching fades to black, we’re feeling the connection Hannah’s having at that moment, solely through her expression. Very similar to the way we felt her break up with Adam shortly before that in the diner. Both times, her face was enough to tell the story. At the end of Baby Boom, there isn’t a prince in shining armor, (though we do know she’ll have a relationship with the local Dr hunk). But the film doesn’t end with Keaton and him or any other male love interest. It ends the way it began, with a mom and a baby.

4. Leaving NYC appears an essential ingredient. In both 87’s Baby Boom, and the 2017 Girls finale, one outcome appears the same. Clarity comes with departing the city. As a native and loyal New Yorker, raised by a single mom, I can’t really agree with that theme. Rather, thank god my mama stayed put. But I do find it interesting that in both stories, while quite different, this concept was similar. Both Hannah, and JC Wyatt move into a house in the suburbs. We’re not around to see Hannah be a homemaker. But if the show continued, I imagine scenes where Hannah attempts to do some form of foreign home repair, perhaps on a roof.

5. The feministic message remains. For being made THIRTY years ago, it’s hard to believe Baby Boom isn’t more outdated. But even with a hollywood ending, and certain stereotypical scenes, the message then still rings true. Motherhood isn’t for everyone. But if it happens to you, no matter what’s going on, you grow up and do the job. It’s not always pretty, and sometimes it’s funny. I can even picture a future Hannah sticking little Grover on a Grocery store produce scale trying to figure out his weight, reminiscent of Keaton in the movie. This isn’t her wheelhouse, but then again, neither was motherhood, and she’s learning to roll with each punch. Unfortunately, we just wont’ be there along the way this time.