You know that feeling you get when you see a movie that sits with you long after you’ve left the theater?  And that rare rush of  leaving and spending the whole way home talking about it with your viewing partner. Her, the new masterpiece by Spike Jonze, which opens nationwide tomorrow is that movie.

We all like going to the movies for different reasons. Sometimes, to escape our reality, sometimes to further our knowledge, sometimes just to veg out for 2 hours. But every once in a while, you see a movie that speaks to you in a different way; and you leave the theater feeling differently about yourself, and the world you live in. It touches you, stays with you, and hours later, you find yourself still thinking about it, pondering symbols, and script as if it was a archaic fossil waiting to be discovered. When I saw Her recently, I found myself smack dab in the middle of that exact feeling. Rare in existence, and not often tapped into.

In todays’ world, a really good movie is like a needle in a haystack. Not many have to much to say, and most screens are chock full of action, special effects, and 3D glasses galore. But sometimes, on those most special of occasions, you see something up on that screen that stays inside you longer than the 2 hours it took to watch it.

Brilliantly played by Joaquin Phoenix in the best acting of the year and ScarJo, in what I think is possibly her best role, Her speaks to human nature, and how we react to falling in love, falling out of love, and dealing with every relationship we have. Theodore, with piercing blue eyes and a style popular in Jonze’s near distant future (which includes high waisted trousers and mustaches) is lonely after his pending divorce. We see this through little snippets of memories; snapshots of his former life that though fast, are some of the most poignant moments of the movie. And yet, we feel there is hope for him just over that horizon. That hope, is HER.

In the most subtle, yet effective way to ever illustrate the future in a movie, we are brought into a world where everything is different, only determined so by the most careful of nuances. A dress code, the containers in which we drink on the go, and how we interact with people. Theodore is a top writer at beautifullyhandwrittenletters.com, and his poignant, heart felt letters are conceived by him, and translated on screen. The act of speaking on a phone ear piece, which these days, can still illicit stares, and questions are now moot thoughts, as it is the norm. And an operating system can not only provide info but be your friend, your confidant, and even your lover.

When Theodore starts interacting with husky voiced Samantha, he almost immediately discovers a feeling of companionship relatable to most people. Thought it might seem as though an operating device as a best friend could project even lonelier thoughts, in this world, it provides much, much more and his relationship with Sam takes on many forms through out, much like in a real one. Their relationship doesn’t just make us question who and what we can fall in love with, and why, but it also explores the human connection and how that can be defined. In many ways Theodore and Sam’s deep connection is as an observation on our lack of intimacy in the world today. Even his best friend, played by Amy Adams, has developed a close friendship with her own operating device. These are meaningful relationships even though in reality their ability to connect to people is lacking. And yet, in the most delicate of moments, we can not just conceive of it, but possibly even relate, and in the end a machine can teach us things that maybe a real person never could.

In the end, Her accomplishes what few movies can. It makes you think, and leaves you questioning yourself and the people around you. More importantly, an ability that most movies today lack, it makes you truly feel. In the end we don’t only watch all the characters grow, each in their own way, but I myself had also grown in some small way. Now that is true movie magic. 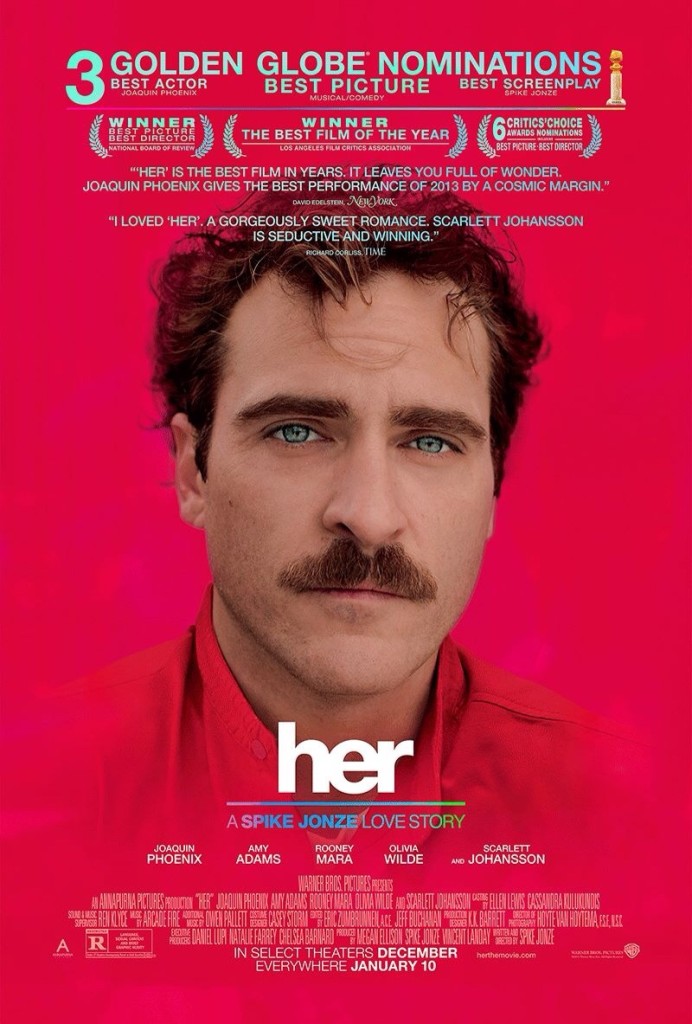