At one point horror felt like a passion to keep hidden, or perhaps bury all together so as not to fuel it’s growth. Something to enjoy, but perhaps more quietly. Now, everything is different. Not only does it feel like the horror genre is being embraced more than ever before, but horrorphiles and enthusiasts alike are screaming their opinions and ideas, and horror film makers, responding as such. A movement which in recent years seems to have brought horror more into the forefront of movie making, and more movies being released than ever. For every crappy PG-13 Ouija or ByeBye man, we get a film that actually warrants real praise from people, not just horror fanatics. The recent, huge success of Jordan Peele’s Get Out, and before that, Don’t Breathe have also cemented the idea that a well made horror movie, one that elicits actual thinking, can hit number one. A feat which will bring a new wave of imitators, and film makers overflowing with ideas they’re all sure will ride the wave of success of thought provoking, well made horror movies. Which brings me to The Void, a smaller, Canadian horror flick recently released to theaters and On demand. Read on for The Void movie review…. 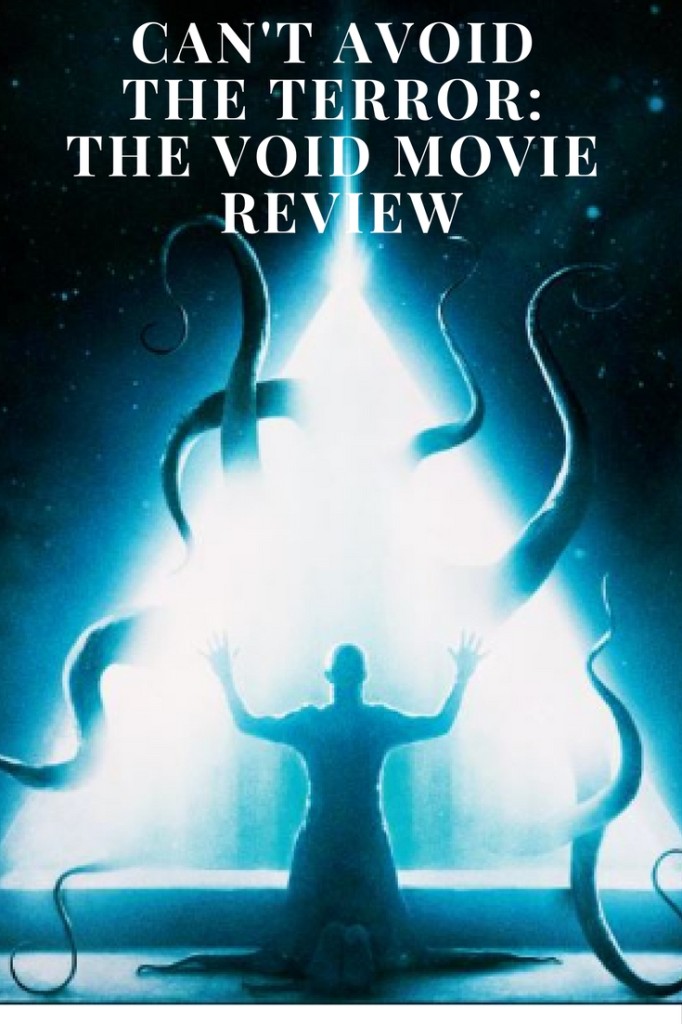 The Void doesn’t have the budget of other, similarly released horror movies, nor the star power. But an underbelly of dark themes, cool imagery and inspiration from classic horror films gives it both appeal, and the desire to learn more. When the movie opens, we’re introduced to a dark setting, an unexplained murder, and local cop Daniel Carter, who winds up in the wrong place at the very wrong time. After finding an incapacitated, hurt man he takes him to the local hospital which is close to shutting down and near abandoned. Inside, him, the ER staff, (which includes his wife), and a very pregnant patient find themselves surrounded by sinister happenings. In a nutshell, craziness ensues. The technical premise, and plot of the movie is pretty simple in execution. On the other hand (and like most good horror movies) much is bubbling under the surface.

The low budget horror vibe is fun and gory, and you can clearly see the impact of legends like John Carpenter, or the more recent hit show, Stranger Things. The idea being that nostalgia for all things 80’s will certainly leave a lasting affect on it’s viewers, (at least the Generation-X ones). In that vein, The Void hits hard, and succeeds. Low lighting, and moments of old school, electronic style music are timed properly, and quite effective. (Also reminding me of recent horror movie It Follows). Gory monster moments, reminiscent of The Thing, are so over the top at points my emotions were mixed between scared, grossed out, and laughing.

When the hospital residents, Carter, and newer stragglers who have forced their way in fully realize something sinister is happening, they simultaneously realize they’re trapped inside by what looks like Ku Klux Klan members. Except these members are creepier, and all bear the symbol of a black triangle on their hoods. They don’t move, speak, or approach. Their presence is quiet; meant to function as a cautionary image of trying to leave, or escape.

All this imagery is effective in both building the tension and enveloping the viewer. As the story continues to unfold, we start to learn more about what’s really going on, (which I will not give away). This includes a cult, our villain, and more about their motivations. But while this surface remains exciting, we really never get to go much deeper. Horror movie moments, some better than others, continue on until the climax which leads us to the basement of the hospital. Apparently, unbeknownst to anyone, terrible experiments have been taking place literally, underneath their noses.  But as these experiments, and their crazy creator comes to light, I was left wondering about other matters.

The crazy, cloaked figures hovering outside are one of the most terrifying aspects of The Void. Yet, we really never get to see more of them, or develop their presence as it pertains to the story. In The Strangers, the mystery of hooded, blank face assailants that attack for no reason is terrifying, and in that case, the sheer mystery works. Here however, I really wanted to know more about these horrifying figures bearing the symbol of The Void. Similarly, quick visions, and imagery used to illustrate snippets from Carter’s dreams, or hallucinations, are some of the most interesting scenes in the movie. Skies of grays, and purples and strange, foggy, undeclared horizons are laid out before our eyes. But, also similar to Get Out, which featured cinematic dream sequences that sadly left me wanting much more, these too remain intriguing, yet never explained or discussed further. The final prognosis being that The Void captivates, but never explains.

To half quote Gordon Gekko, Gore is good. But sometimes, even in a horror movie, it’s not quite enough.