We’re upon one of the most important days in recent history. One which we all already know is important, unless you’re living under a rock. It’s one of the most brutally divisive political climates in recent history. All leading up to a potentially historic Election Day. We’re in a time when using your voice to exert your power isn’t only important, it can actually be effective. But if you’re a movie buff, you might prefer to do your research through a more fun outlet; film retrospectives. What better way to bring biting analysis to an important topic than discussing how it’s shown on screen. With that, lets reflect on some of the best political thrillers to watch right now. They’re more timely and relevant than ever.

3 of the best political thrillers to watch right now

1. True Colors. John Cusack left his standard ‘type’ behind to play sly, manipulative politician Peter Burton. Even more confusing, the usually brilliantly bad James Spader is Tim, the good guy against him. Tim and Peter are best buddies from law who eventually head towards the same place, in very different directions. Tim works for the justice department. Meanwhile, Peter, driven by political ambition, and aspirations of congressman, rises in the ranks of powerful DC players. This rise includes lying, blackmailing, manipulation, and even stealing Tim’s girlfriend (whose father is senator), and marrying her. When the alliance between the friends is shattered, Tim eventually offers to help ‘get’ his deceitful friend.

This movie may seem like an inconsequential 90’s thriller. But it’s also relevant, and s feels pertinent right now. Good vs evil, white lies, political seediness. All elements at play in True Colors. And they culminate in an intense climax which occurs on Election night. By this time, Peter is a respected, admired figure about to win his coveted seat. But Tim, and us, the audience know the truth. Behind the flash and the smile is a slick manipulation that has grown bolder, and seems to know no limits. Sound familiar? Unlike our current real world however, this bad guy will have a downfall. Peter’s father in law upon learning his evil tactics says to him at one point,

“…you may win an election or two, you may even be able to live with yourself. But god help you when the people find out. And they always do.”

2. The Manchurian Candidate. One of the best political thrillers of all time. The 1962 movie is a (somewhat) sexy political thriller with a wicked femme fatale. She also happens to be Angela Lansbury. Not only does it showcase a tough, powerful woman, it takes other timely topics and turns them into a stylish film. “My dear girl, have you ever noticed that the human race is divided into two distinct and irreconcilable groups….”, Raymond utters at one point.

Frank Sinatra is Ben, an intelligence officer in the U.S. army who proudly served as captain in the Korean war. His sergeant, Raymond Shaw has won the medal of honor. But upon returning home, Ben is having continuous nightmares that include Shaw doing awful things. When he visits him, he meets his tenacious, right wing mother, Eleanor. The deeper he delves into his nightmares, the more he learns about what really happened to him and his men at war. The answer will stretch far beyond the walls of his mind, into a political world that is ruthless and merciless. 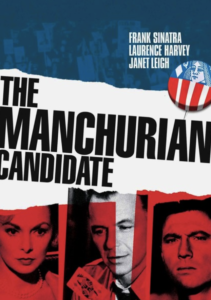 3. The Man who knew too much. Hitchcock’s ’56 remake (of his own film) is about family and power, with lots of political undertones. James Stewart and Doris Day are an American family visiting Morocco. When they witness a random acquaintance being murdered in public, a secret is told to Ben, (James Stewart) that inadvertently embroils them in a massive plot. One which includes kidnapping and murder. To prevent Stewart from heading to the police, the perpetrators kidnap his son. Ben, and his wife, Jo are then thrust into a dangerous game that includes rescuing their son, and stopping a political assassination. 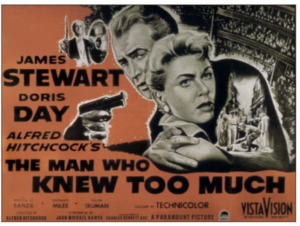 This post partners with DVD.Netflix.com where you can find thousands of movies. As a DVD Nation ambassador I share a love of movies and earn rewards. All writing and ideas expressed are my own. #Dvdnation #ad