As Jim Jeffries (star of Comedy Central’s eponymously named show that was just cancelled) said to conclude each episode, “…we can do better.” So how can we transform that idea into self reflection; a way to be a better person this holiday season (and afterwards too)?

As the season that ends this particular decade approaches, I’ve been thinking about that weekly send off.

Four, simple, light words that hold within them, the weight of the world. It’s a wish for all of us, not only to do better with others, but ourselves too.

This season bring a picturesque scene to mind. A fire crackles while All I want for Christmas is You plays, and the smell of homemade cookies fill the air. All around, you’re surrounded by warmth, comfort and love. This is an ideal setting, and for good reason. But let’s get real.

This time of year also brings intense reunions with family members. A heightened sense of grief, depression, or a reminder that you might not be able to celebrate the way you want. Either because you don’t have the funds, the family or the options.

The holidays can also be about good food, parties, and perfectly wrapped presents, yes. But there’s a deeper meaning we should extract from it. A lesson to shower people with love and time, instead of expensive things and share not just items off a list, but a deeper connection with each other. An opportunity to give back to others, and also to ourselves too. 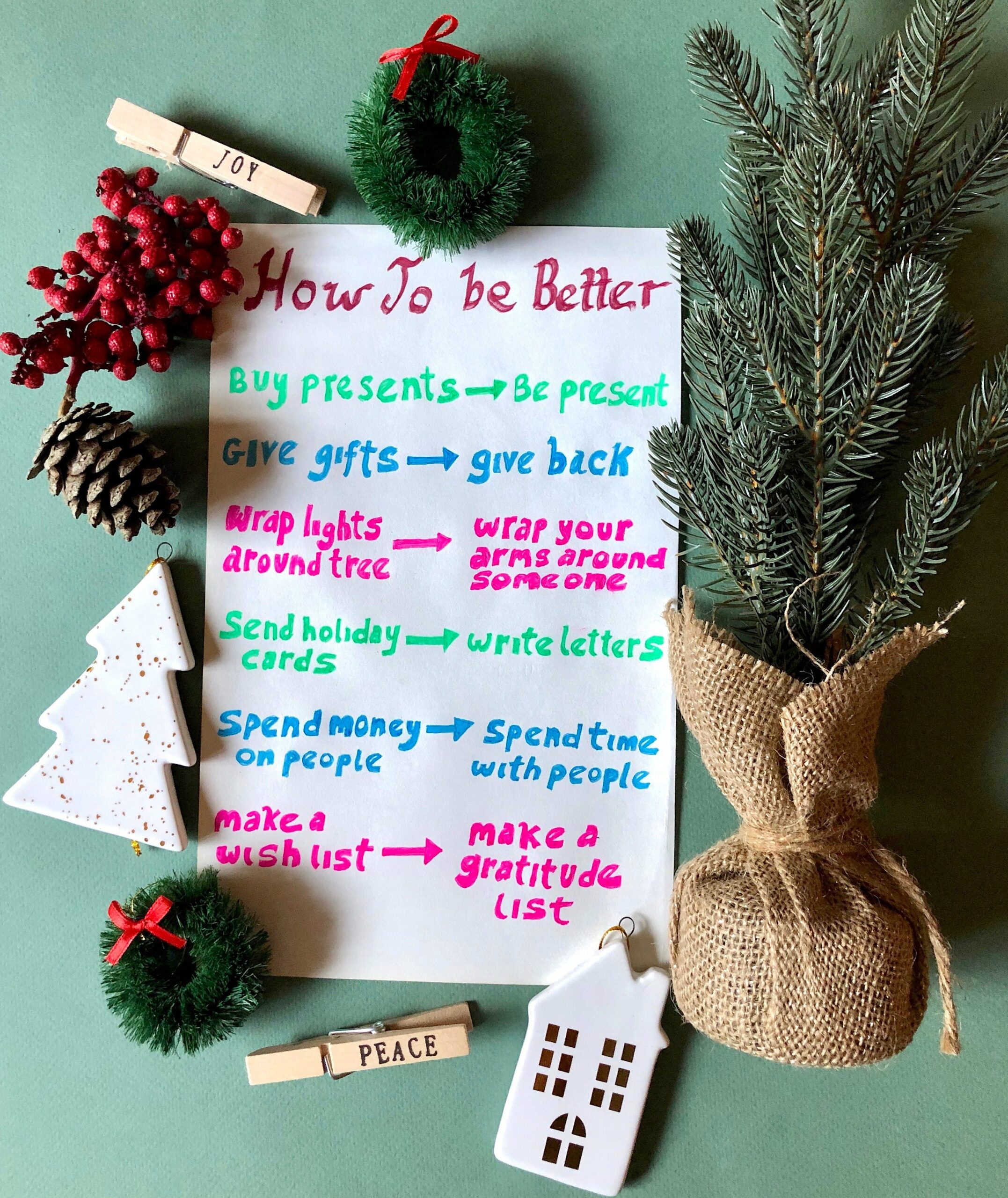 here are some ways to be a better person this holiday season (and beyond):

Be present with people.

Put down the cell phones, and actually spend time with those around you. (In my opinion), it’s the easiest way to be a better person this holiday season and show people you care for them. If you’re married, or a in a serious relationship, put down the Netflix, and phones for one night. Instead, play this 36 question game to tighten your bond on another level.

We spend a lot of time during these months planning out gifts. Feverishly going out into the real world, (or virtual one) to procure said presents. Then becoming giddy with glee at the time of exchange. But what if this year, instead of gifts, you gave your time, and help to others who may need it more.

Even if you only wind up doing it during this time of year, it still counts. Here’s a list of some volunteer opportunities around New York City for the holiday season.

I also love this Operation Santa USPS program which allows you to ‘adopt’ letters from children to Santa, and fulfill their wishes.

It’s been proven that hugging someone has not only loving, but real healing properties. Wrapping your arms around someone for a few moments isn’t only a physical way to show your feelings. It can literally make someone feel loved. Who wouldn’t want to gift someone with that feeling. During the holidays, or any day of the year. So this year, skip the cheek kisses and go straight for a big, bear hug.

Send letters instead of holiday cards.

When was the last time you wrote an actual letter, or got one in the mail from someone you know?  Probably not for a very long time. But I wish letter writing would come back into style. It’s an inexpensive way (Whatever the cost of a stamp these days) to tell someone you give a crap. Remember how good it felt the last time you did see a hand written letter in your mailbox. Studies show it’s not just rewarding for the receiver.

Letter writing can also have a powerful effect on the writer themselves. So this year, instead of holiday cards (or at least in addition to) send some letters out to friends or family. It can be on expensive stationary or a legal pad, just write or share something with someone.

Spend quality time with others.

It’s the busiest time of year for many. Endless office and holiday parties. But this year, try to be more mindful of where you spend your time. Make space in your month to see an old friend. Visit a family member you don’t see very often, a friend you never get to see, or most important, spend time with yourself.

It’s been proven that gratitude, when practiced repeatedly can have a profound effect on someone’s well being. It makes you feel better but it can also, in a sense, make you a better person. Being grateful for what you have doesn’t just make you more mindful, it also makes you treat others better.

When you can appreciate the small things in life, you in turn, express more joy. It just happens. And who doesn’t want to be around someone who’s in a good mood, especially during the most wonderful time of the year?

How will you be a better person this holiday season? 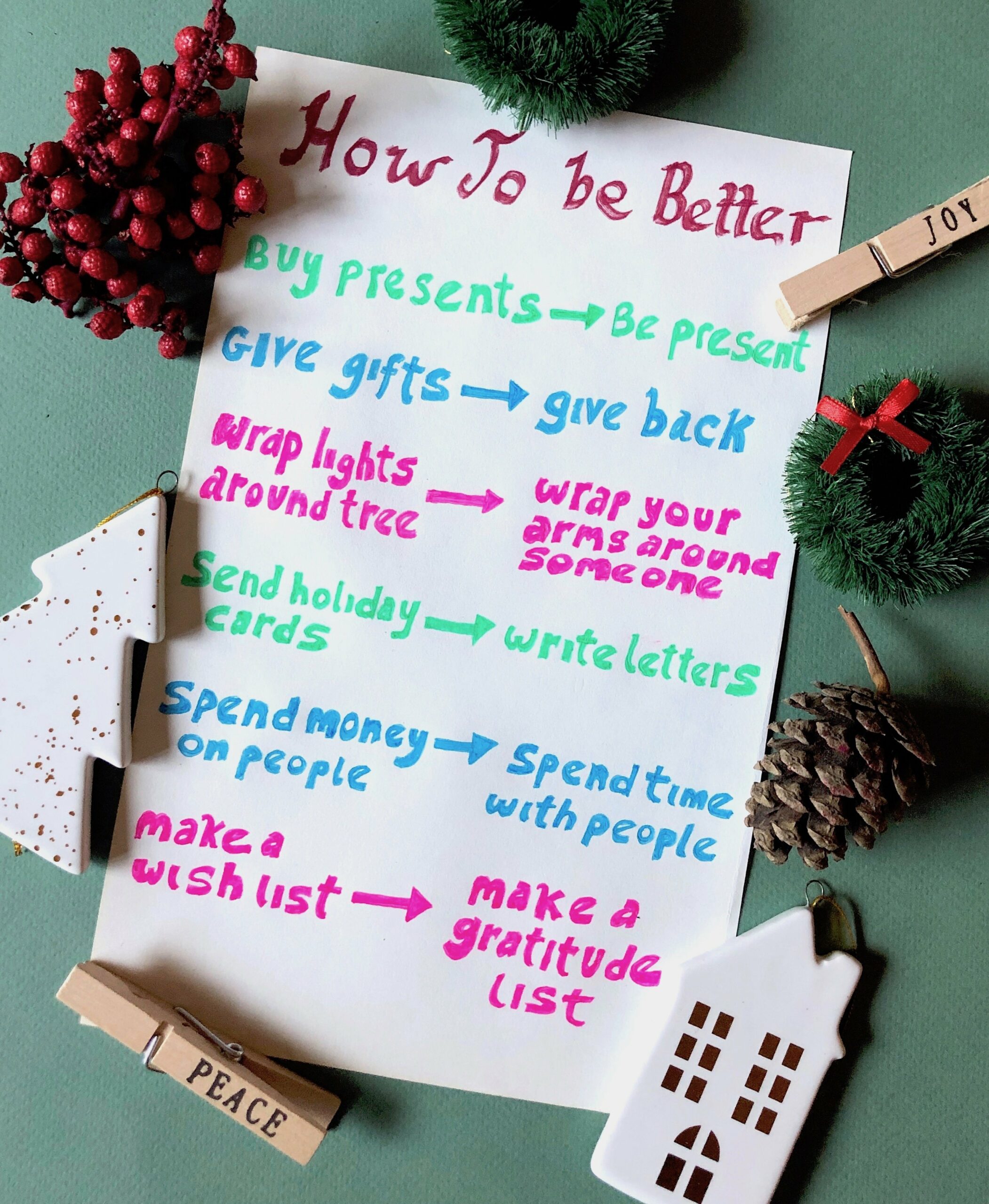