Around Town~ East Village Nights at the new Ethos Meze

The only thing one can be certain of during summer, city nights is that nothing is certain. When you leave your house, no matter where you’re going, who you’re meeting, or why, you can almost always guarantee that at least one thing will play out unlike you expected. One of these perfect little gems happened late last week when I went to go check out the grand opening of the new Ethos Meze restaurant on 11th and Avenue A.  A cute little spot, which replaced Diablo Royale and perfectly sandwiched between other hot spots in a busy part of town. In the East Village, cute, hip little restaurants are a dime a dozen, lets be honest. But what can easily stand out in the crowd is authenticity, good people, warm atmosphere, and maybe a little bit of charm to go with it.

Inhabiting all those things, Ethos Meze looks to bring some new cool to the block. Plans for mixology, garden to table eating, and a private party area are all in the pipeline. The only thing missing from that aforementioned list is the pretentiousness that usually goes with it. After being shown around and greeted by the owner, I sat myself at the bar with a glass of wine; which I was told was a mix of Sauvignon and the Greek wine, Assytirko. This concoction was not only one of the fastest glasses of wine I ever drank alone, but one of the best. I continued to be treated to some amazing samplers by Chef George; a chef in fine dining for over 25 years.  With a big grin and warm demeanor, he treated me to Octopus Salad, bruschetta and some of the most delicious chicken I have ever had with an apricot dipping sauce worth coming back for.

As I sat at the bar by myself taking in the scene, I began chatting with someone nearby, and ten minutes later we were sharing food. A friend of the owners, him and his girlfriend had frequented the new restaurant every night that week, with plans to return for a Sunday brunch. As we talked, we realized not only did we have food in common, but we had grown up only 1 block from each other! An hour later, me, the guy, and his girlfriend had eaten, laughed, and shared stories. I realized that the night had morphed from a simple, standard work event into several other things. I am not the type to sit at a bar by myself with a drink. I applaud those who do, but it’s never been me. But that night I did it with pleasure, and ultimately, wound up being alone for only a few brief moments. I left with a full belly, plans to return, and some new, old friends. But that, in effect, is the city. Even if you’re by yourself, you’re never alone. 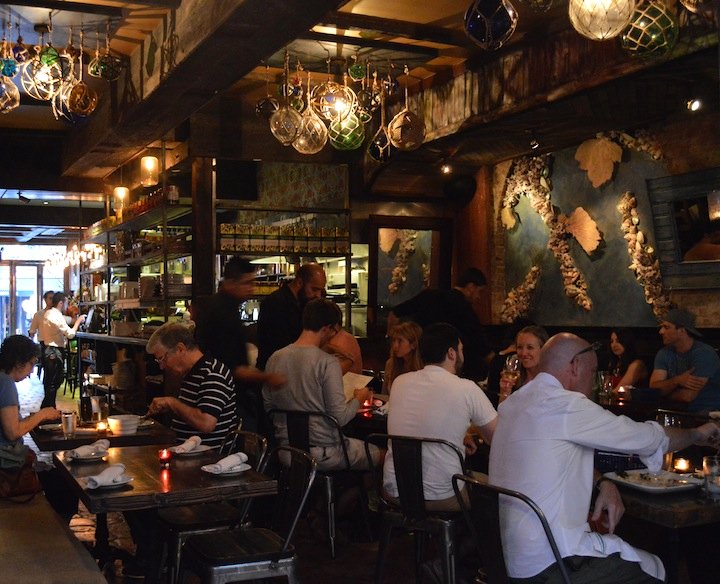 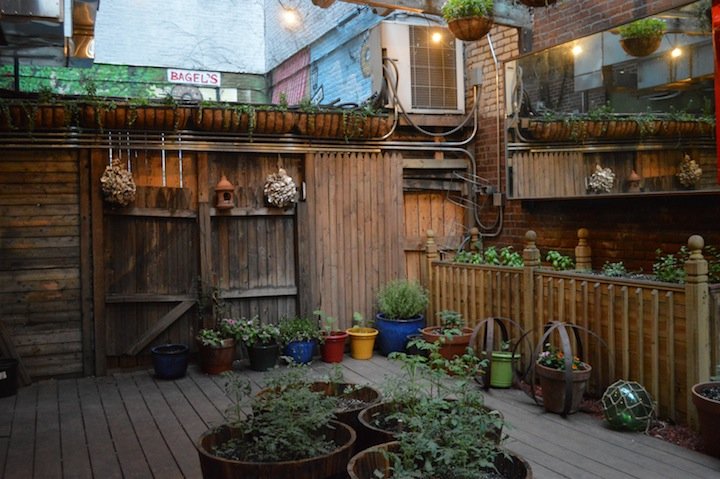 The outdoor part of Ethos Meze. Soon to be a part of the dining experience, where customers can actual pick their veggies out themselves to eat. 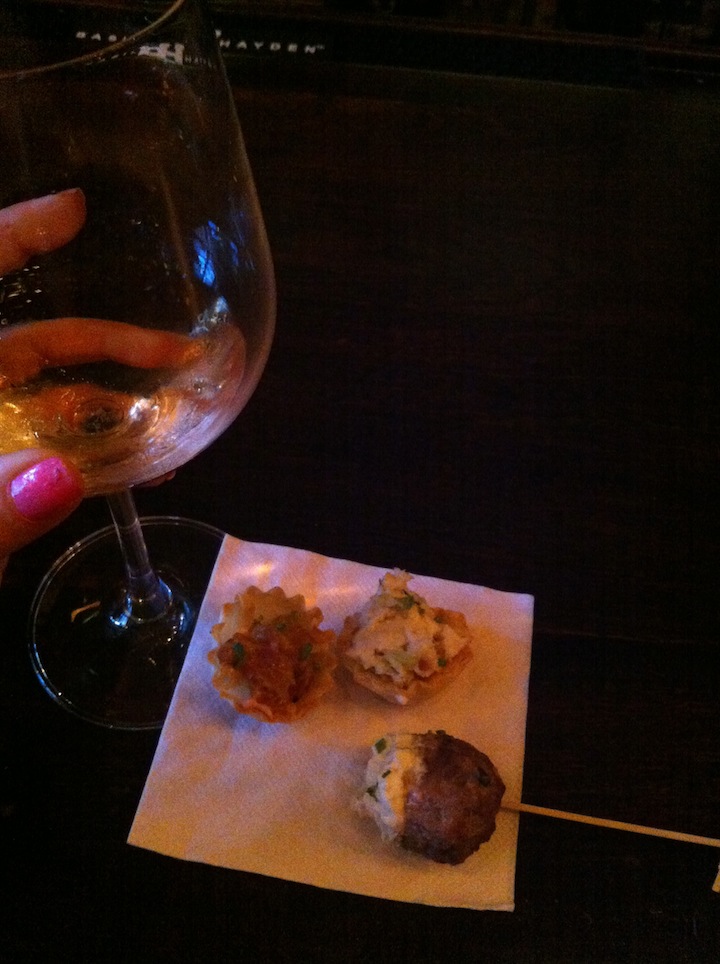 Some samplers; tuna tartare and crabmeat  in a pastry cup, and meatball with my Assytirko wine. 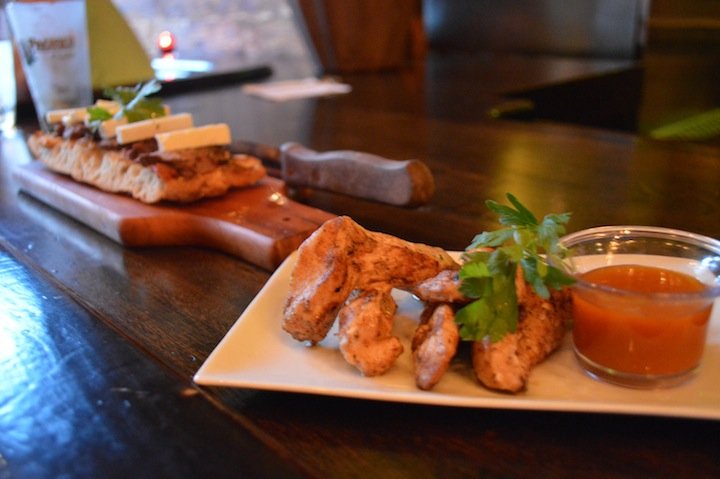 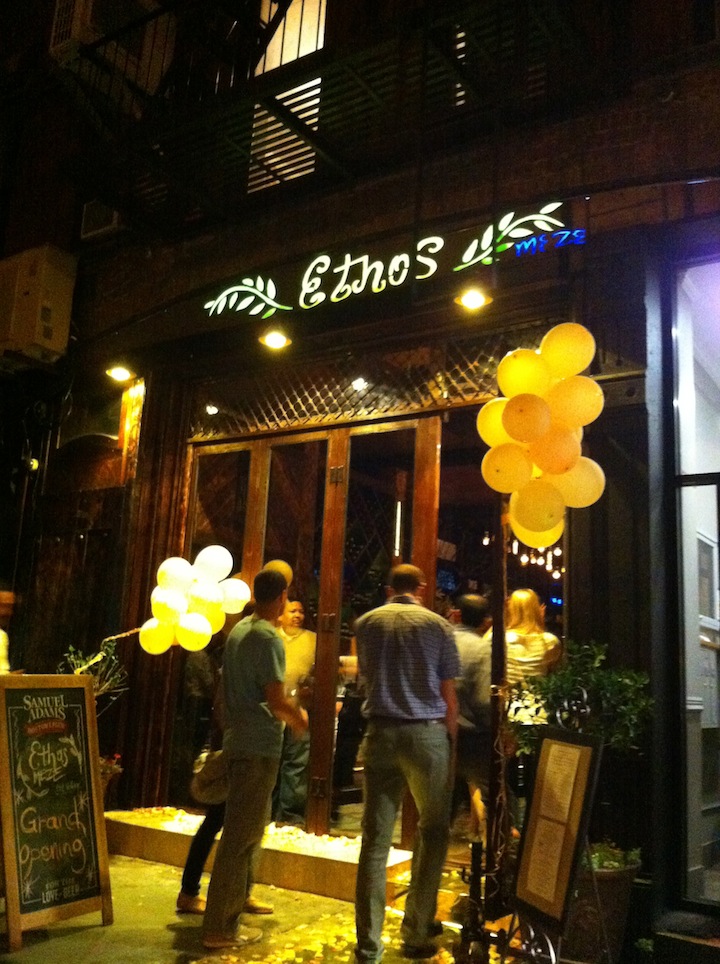