Around Town: 5 Scary Movies to See on Halloween in NYC

There are lots of fun things to do on Halloween in Nyc, as we all know. For your tourists, or New York City newbies, you have the parade. I admit it’s something you have to experience at least once in your life. I also admit that, maybe it’s the fact that my boyfriend is a little Larry David-ish, or the fact that I sometimes seem the same, but the crowds are nothing worth leaving your apartment for. Then there’s the Halloween I spent out at Webster Hall, Soho Grand, and various other crowded bars where city dwellers banded together, costumes disguising faces, and enhancing confidences. But theres another fun way to experience Halloween in NYC, and it’s in front of a screen, tucked away inside the confines of the city’s cinemas. Every year I await the various Halloween series that will play in Manhattan movie theaters. Last year, I opened my boyfriend’s eyes to how fun this could be, when we went to a late showing of Silent Night, Deadly night at City Cinemas. And this year, the city did not disappoint. Here are 5 reasons to spend this Halloween watching the horror unfold on screen instead of infront of you.

1. Hitchcocktober at City Cinemas. Growing up in the East Village, I’ve been around the City Cinemas theater all my life, and there is something very special to be said about the existence of this theater amidst only blocks away, chains of Starbucks, Duane Reade and Chase banks. On the outside it looks like an unassuming, run down movie theater. Inside, if you’re lucky enough to see a movie on the main screen, you climb upstairs and escape into a massive opera style theater house. This month, the classic cinema is celebrating Halloween by devoting the entire month to the master of thrills; Alfred Hitchcock. Theres only 2 Thursdays left in the month, so make sure to check out the movie house for a guaranteed fun, new york city night. Schedule here. 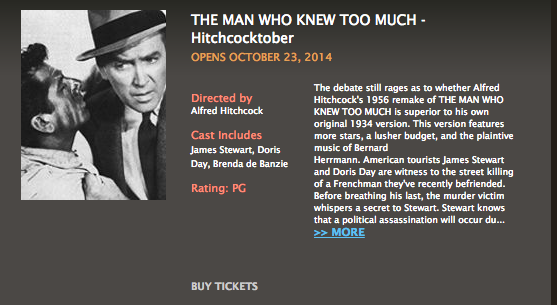 2. A Night to Dismember 2014 at Nighthawk Cinemas. Nitehawk’s annual all-night Halloween horror movie screening is back! I’ve always wanted to check out this awesome movie theater, which serves you beer and food while you watch, but have yet, at almost 34, to make it to the midnight mark and go. So sad. I vow to change that this season….The all nighter starts at midnight on Halloween, and continues till morning, showing Evil Dead II, The Bride of Frankenstein, Friday the 13th Part 2, Dracula: Prince of Darkness, and Return of the Living Dead. See more here and RSVP to Flavorpill

3. Midnight Series at Sunshine Cinema. The East Village cinema is showing midnight movies on Fridays and Saturdays through December and the best part is, all showings are only $10! Every week the movie house will show a flick, starting off this weekend with the devastatingly sick, Cannibal Holocaust… You probably don’t know it, only sick minds like me do. But soon enough, you might know the remake, coming soon, directed by Eli Roth. Hit up the classic Monster Squad on Halloween night. I’m most excited about seeing Christmas Evil in December. It’s a special day in our house when we discover a new 80’s horror movie so I guess Merry early Christmas to me!  Click here for the full lineup.

4. Chelsea Cinemas Chelsea Classics. I’ve always been a fan of the West side movie theater’s classic nights. But they’re never more fun to check out, then on Halloween. This year, to celebrate the season they’re playing Friday the 13th, Halloween, and last but not least, Mommy Dearest; Faye Dunaway at her most horrifying. The movies play the last two Thursdays of October, and of course, on Halloween. Tickets are $8. This is the only time you will ever again be able to see a movie in New York City for under $10. And that deal is soo good it makes me want to scream bloody murder!

5. 10th Anniversary of Saw. To celebrate the 10th anniversary of the classic horror franchaise, Saw, it’s coming back to theaters in a master redux for one week only during Halloween. Check out the pre-sale at Fandango here. The original that spanned the series originally opened on October 29th, 2004. See the re-release trailer here. 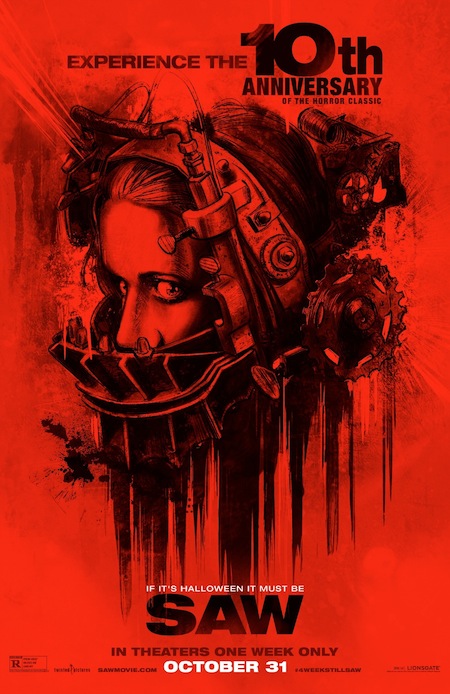