Earlier this week I headed out to Comic Strip Live on the Upper East side. Normally, I wouldn’t make the trek that far up but this night there was a good reason. A special screening of the new Adam Sandler Netflix special, 100% fresh. Sandler originally inked a deal with Netflix back in 2014. His four movie deal with the streaming giant was extended last year to include four more films. But the Adam Sandler Netflix special is something entirely different.

The hour long show is a mash-up of videos and clips showcasing moments from Bring the Funny. The comedy show starring Sandler and his buddies toured the U.S. all last year and into this year.

Sandler has done musical numbers and comedy acts in the past, but this was (unbelievably) his first true stand up special. Having already seen two of the tour’s shows this year, in Westbury, NY, and Vegas, I hesitated at thinking an Adam Sandler Netflix special might have anything new to absorb. 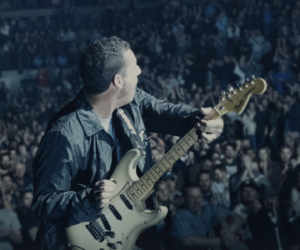 The Adam Sandler Netflix special 100% fresh, which Sandler wrote and directed, is put together in a funny and endearing way. It highlights the best of his tour, with other short videos and images mixed in. A notable moment, (which I wished I had witnessed) shows Adam and his keyboard playing partner heading down incognito into the NYC subway. Others show Sandler doing trademark voices, and little dances. Those that harken back to a younger Sandman. Characteristics from Billy Madison and Waterboy that made him famous, yet in a new era of millennials seem mostly forgotten.

But Adam fans will remember it all when they watch 100% Fresh. Though new material, and song content show a more grownup Sandler, in it’s purest moments its a return to classic Sandman. Yes, Billy Madison is now 51 years old. (Is that possible??!). Married with two kids, he’s officially grown up, (kind of).

Many of his short songs include topics like taking his daughter on a bad playdate, and trying to deal when his wife’s giving him the silent treatment. Others allow us to reminisce on older Sandler antics. One standout, done in perfect Sandler fashion is called Phone, Wallet, Keys. It too reminds us that this Adam is more synonymous with a simpler time. One before Ipads, Instagram, and Youtube.

That authentic nature is still there. It’s part of what makes 100% fresh so great. But it’s more than just silly songs and faces. A song dedicated to his pal Chris Farley reminds us that Adam has more than one side. Not only can be serious, but he’s also really talented too. He closes the show singing a version of Grow old with you as a loving tribute to his wife. There’s also footage of his daughters, which I’d never seen. It wasn’t in the tour.

With a slew of (I’m sorry Adam!) forgettable Netflix movies through the years, it’s easy to forget these sides of him. For those who never forgot, like myself, 100% proves that though he may occasionally rely on old school schtick, this Sandler is fresh, and funny.