11 Things I learned at this Weekend’s first Panorama Festival

Last weekend the world found itself in the midst of the first ever Panorama festival. Touted as New York’s answer to Coachella, the festival would provide a fusing of music, food, arts, and technology to the good people of NYC and surrounding areas. Interestingly enough, Panorama was on our “Summer concerts list” but due to finances, and wedding planning we had to nix it. So imagine my happiness to find out that ironically, we would still wind up going. LDV hospitality, who are behind American Cut and other cool city spots hosted an Instagram contest, which I had somewhat mindlessly entered. By taking two seconds to tag someone I’d go with, (a simple, quick request utilized by most Insta contests), I was now the owner of 3 day GA passes to the first ever Panorama festival on Randall’s Island. After all that, we would be going anyway, thanks to LDV.

Although I’ve been to a few music festivals in the past, including Jazz Fest, ACL in Texas, and Governors Ball last year, this would actually be my first weekend long one. Throughout the journey I would learn a thing or two about not just myself, but New York City and the things that surround us.

1. I’m kinda old for music festivals. I hate to say it, especially because I just saw some article recently on how women in their 30’s shouldn’t be calling themselves old, but after spending the weekend on Randall’s Island, I tend to lean towards the thinking that most music festivals are a younger generation’s game. For one, I found myself saying things like, “Did her mother let her out of the house wearing that?” When at one time there would have been party drinks in each hand, now I’m sure to remember to keep drinking water. Shade becomes an important factor throughout the day, and by the end of the night, it seems okay to leave by the encore.

2. There are some awesome bands out there I never knew existed. I thought I knew a lot of music, but the truth is, it doesn’t even scratch the surface. Although it doesn’t hurt to be marrying a music afficianado, being at Panorama made me realize there is so much great music out there to learn about, and I was getting a chance to discover it all in one place. It began with Silversun pickups. Later, we were running to make Broken Social Scene, which I knew from hearing at home a lot, but jamming to in person was a whole different story. By the time the weekend was over, I had a whole new appreciation and playlist to create. 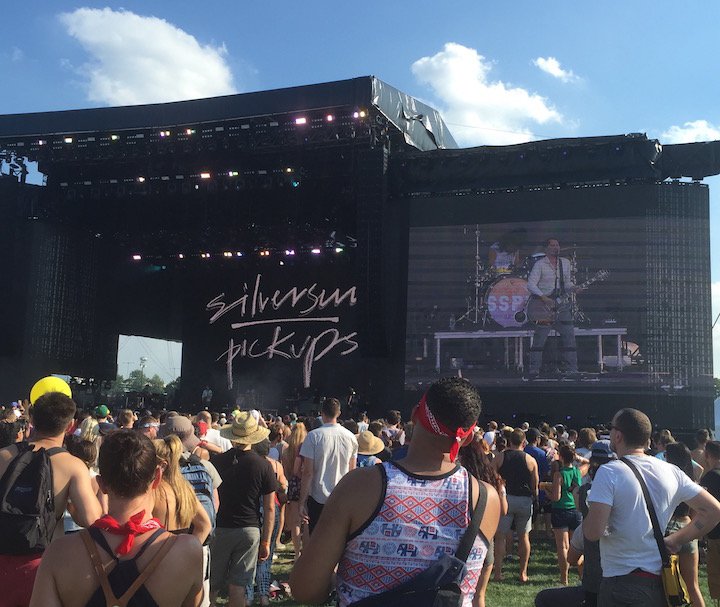 3. Arcade Fire is amazing. Once again, I have to credit my partner with truly introducing me to the hugely popular band. Although well known they went mostly unknown to a hiphop and rap girl like myself. But ever since a whole different type of music genres came into my life, my tastes have expanded drastically. But no matter what your favorite is, it is mostly hard to deny the stage presence of Arcade Fire. It was my first time seeing them in concert, and they truly rocked it.

4. Girls are beyond confident these days. As anyone would, I spent a good portion of the weekend observing everything around me, most of which would lead me to conclude the above statement. As I mentioned earlier, most of the women that surrounded me left little to the imagination, many of whom seemed no older than high-school. While I always advocate personal style, I couldn’t help but think style these days seems to be purely reflected in your ability to rock a crop top  or bra. And though I do admit in some cases to a slight twinge of ab jealousy, overall I turn my back on an industry or trend that condones walking around with your ass hanging out of your shorts. But apparently, my opinion is the minority, and there are a lot of girls out there craving loads of attention with enough body confidence to go around.

5. Robertas pizza is delicious. Hard to believe that a proud native New Yorker would have never had Robertas, but being a local doesn’t always necessarily mean you’ve done it all. In fact, part of what makes this city so special I think lies within the fact that a native herself, could, still experience it in all new ways. 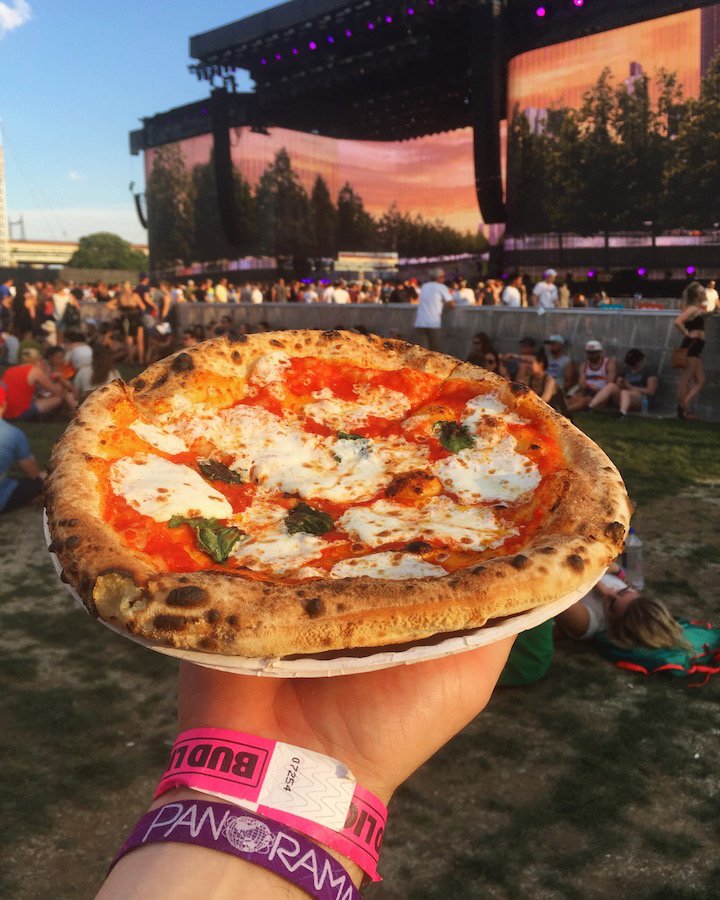 6. Im a huge Alabama Shakes fan. Yet again, I found myself exploring a new groove for the first time. Though I was familiar with Alabama Shakes before, I had never seen her in concert. However, after an hour and a half of a deep, soulful performance at Panorama I realized that I loved her. Now I want to play her nightly in the background as I make dinner, cause that just sounds like a perfect city scene. 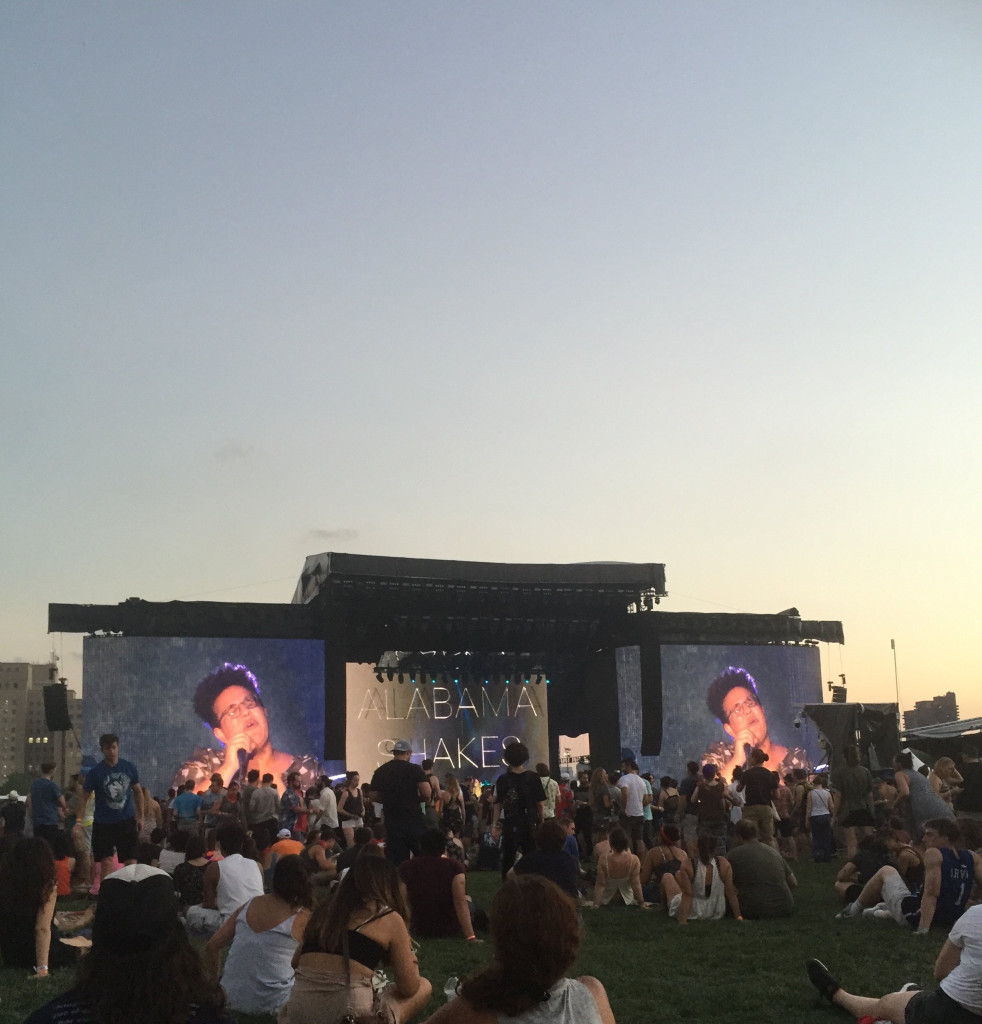 7. The walk over the Robert Kennedy bridge to Randalls island is actually kind of nice. But not in 95 degrees. We made the trek across on Friday, from the express train, and arrived at Panorama already drenched. We eventually cooled off, and by 12:30 that night, we were headed back onto the bridge. It had cooled a bit, but now we were like cattle, being herded across in a mass exodus from one island to another. When we arrived back on Manhattan, the walk to the train plan was nixed for a quick cab home. Worth every penny of the twenty dollars.

8.Ferry Fun. I’ve taken the ferry several times from Randall’s Island, but never to the island, or during the day. It’s actually a really beautiful ride; even one a cynical New Yorker can appreciate. By night two, we were back on it, for the ride back home. Any time I get to be near the L.I.C.’s Pepsi-cola sign; one of my favorite things in the world; is well worth it. 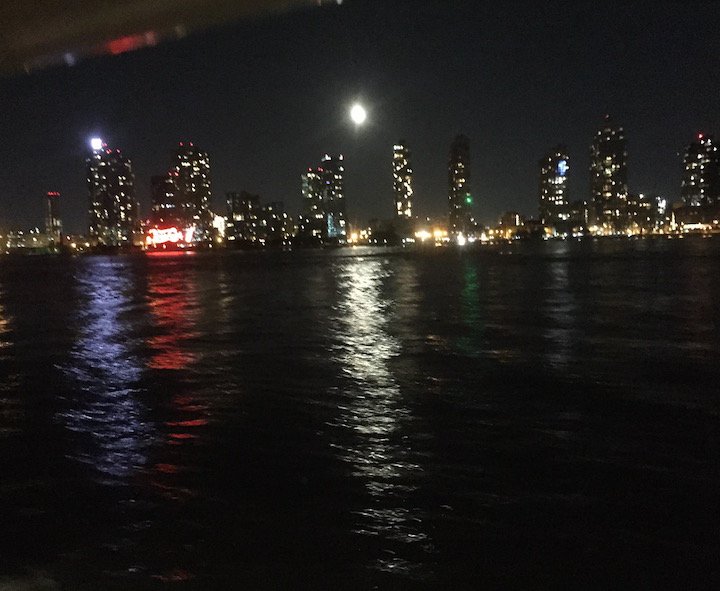 9. Panorama is maybe the best festival I’ve been to so far. Governors Ball was a big blast, but something about Panorama seemed a little more city to me in overall atmosphere. It’s wasn’t just a mosh pit of music with models and hipsters everywhere. It was more a mixture of eclectic music, tasty bites, exciting art, and interactive activations. Though I didn’t get to totally indulge in all the exhibits (it’s hard when future husband is a real life Larry David) but we did manage to check out the Lab, take some pictures and even chill in a planetarium show for a few minutes. Plus extra points for better bathrooms, and food lines that actually went rather quickly. 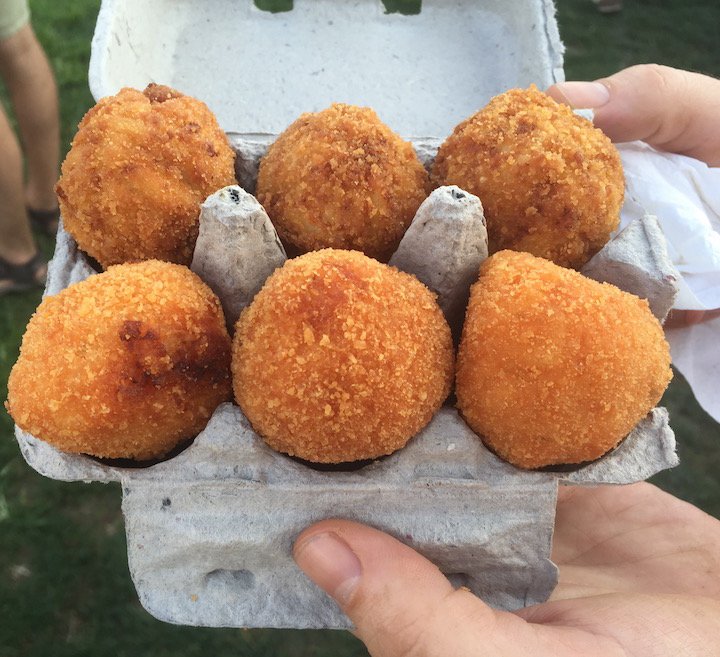 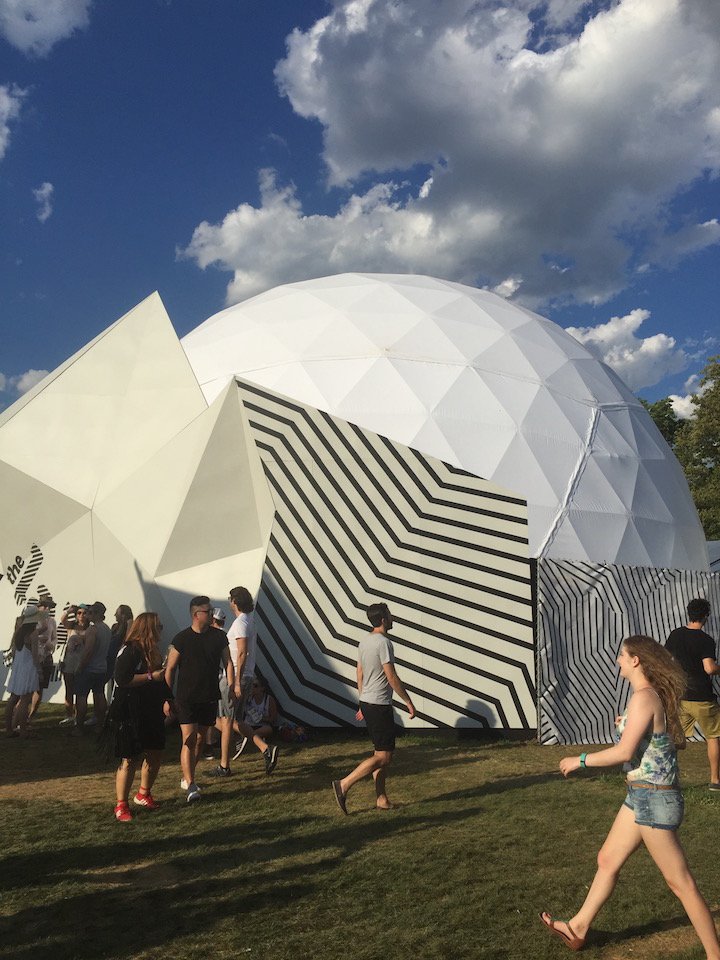 10. NYC style will always stand out. While I didn’t agree with a lot of the fashion choices I saw, (I guess I’m old fashioned that way), there were some stylish high points throughout the weekend. Some themes included overalls with bralets, denim, funky cross-bodies and a ubiquitous red bandana which, hard as I tried I couldn’t seem to find. The best part was watching how each girl styled her free bandana. Some rocked a headband, some a scarf, and others opted for anklets. Between that time of the month and the extreme heat, I sadly couldn’t harness much effort into style for the weekend beyond silk pants tank tops and Stan Smiths. But that doesn’t mean I can’t appreciate the few who could. 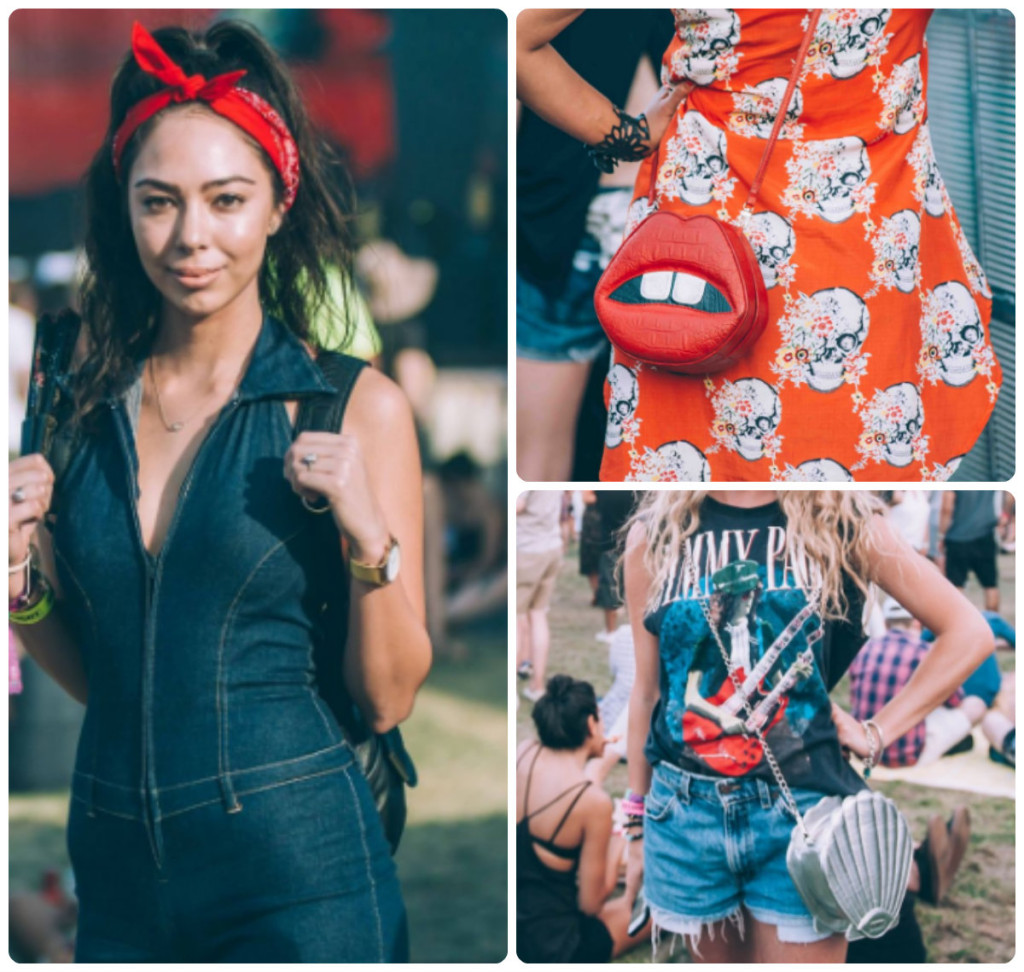 11. Everything comes full circle. Four years ago me and one of my besties went to see one of our new favorite rappers at the intimate Roseland ballroom. The NYC institution has since been demolished, and the rapper went on to worldwide fame, and grammy wins. So last weekend when our Saturday night festival day commenced with Kendrick Lamar, I took a moment to appreciate the cyclical nature of life. We, as we always said, discovered the artist and now, here he was closing out night 2 of Panorama Festival. His culturally image driven set was one of the highlights of my experience. 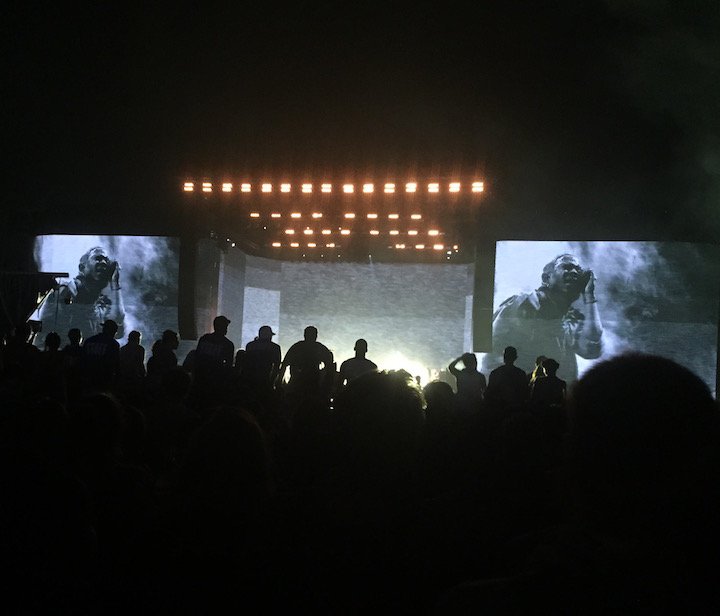 Panorama festival might seem like the east coast’s answer to Coachella, but to me, its just a super fun summer weekend with my city love. Can’t wait till next  year. And thanks again to LDV hospitality for sending me on the #LDVlife for the weekend!