The Academy Awards are a star studded event each year where anything can happen, and much of the time, nothing does. It can be notoriously slow or even dull. But some of the most memorable moments in Oscar history don’t include historic wins, but rather, historic mistakes. You probably can’t tell me who won best supporting actor or actress last year, but you’ll never forget the utterance of ‘Adel Nazeem’ in pop culture. Now, the Academy Awards makes history again after the 89th show concluded with an unpredictable ending that could rival any movie script. And with that monumental moment between a reunited Warren Beauty, Faye Dunaway, and one very famous envelope, the show cemented its place in history. Though the Best Picture snafu, (now considered the biggest awards show blunder of all time) will ripple through our world for days to come, eventually we’ll lose interest and return to a world where misrepresentation isn’t a blip, or mistake, it’s the crux of our president’s platform. For now, let’s stay in La La Land just a little bit longer where we can enjoy all the weirdest Oscars 2017 moments we can find.

1. Chrissy Teigen supposedly took a cat nap during Casey Affleck’s win. There’s no way I believe this, and Teigen’s already brilliant at getting noticed for being ‘real’ whether the realness is set up or not. In this case,  I’m not buying it, but she’s still super cute. 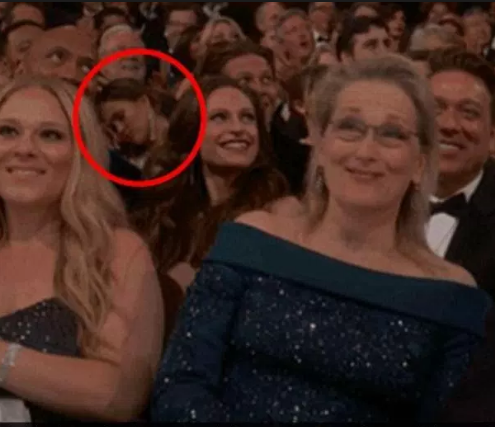 2. The In Memoriam not only left amazing actors out, it accidentally used the wrong picture for someone!

3. The world caught on to Nicole Kidman’s issue with clapping.

4. Moana singer Auli’i Cravalho got hit in the head with a flag during her performance. But she handled it like a champ.

5. Brie Larson didn’t clap for Casey Affleck after handing him the award.