5 Ways Leonardo DiCaprio Oscar Speech is the Best Thing Ever

Some people may have been up in arms leading up to last night’s 2016 Oscars, and the lack of a certain something... But one thing not lacking was the overall consensus that Leonardo Dicaprio was more than deserving of his first Oscar win (finally!) for The Revenant. Leo took the stage to accept his win (to a standing ovation) and immediately captured everyone’s attention. Usually on the Monday morning following Oscars I’m putting together my recap story on my favorite moments of the night. While there were a few clear standouts ( the first time anyone accepted an Oscar in an Awesome studded, leather jacket for one), my focus seemed to keep returning to 1 word; Leo. So if you want to see roundups of the best moments from last night, head somewhere else. Here, we’re doing a quick water cooler chat on why the Leonardo DiCaprio oscar speech was the best thing ever. 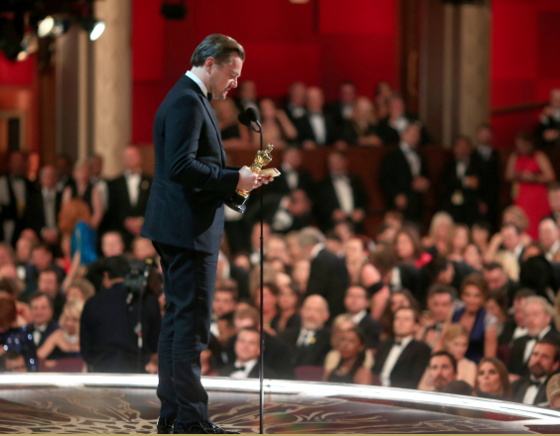 1. He had perfect poise. Dicaprio thanked everyone he needed to, and didn’t fumble or misstep even once. He’s had some amazing roles in his career but I think the ability to get on that stage, and perfect the balance between bravado, appreciation, and modesty deserves a mention within itself. Being transparent upon a win, especially one so expected is almost impossible to pull off, even when it’s sincere. But the Leonardo Dicaprio oscar speech, done with no notes or pretend ‘not ready’ scribbles proves the best actor in the world can still be humble, and super excited while remaining articulate.

2. He honored his teachers. Leo paid homage to his mentors including Scorcese, who he credited with turning him into the actor he is today.

3. Nailed personal thank you’s. A simple 5 words said it all; ‘you know who you are’. Couldn’t have said it any better, or easier!

4. He loves his mom and sister. Is there anything cuter in the world than a gorgeous man who tells the world how much he loves his mom? Yes, one who brings his mom or sister as his date to the biggest night of his life.

5. It raised awareness for the environment. Leo’s passion is climate change and he took the opportunity to speak to his cause explaining that the Revenant shooting traveled across the world just to find snow covered mountains. Although some may think it preachy, it was noticeably the only speech (maybe ever?) that wasn’t cut off to music even once. Proof that whether or not you truly think winning an oscar ‘means something‘, you can’t deny that occasionally, accepting one can be be a powerful platform. Leo proved that last night.