Last night’s 90th Academy Awards had a bit more potential going for it than normal. Though coming from a true fan and Oscar’s party host, the notoriously long show can be lackluster and boring. This year, topics like the #Metoo movement, Trump (of course), and the inclusion of often overlooked talent (including Jordan Peele’s horror film Get Out, and Greta Gerwig’s directorial debut) promised to make for a more note worthy show. While the four hour long awards show didn’t exactly bring down the house with major excitement, or poignancy, it did eventually offer up some key moments. There were no major mishaps to speak of; no Jimmy Kimmel joke got booed, and no envelope fiasco in sight. What did eventually come out of the Oscars were a few important, seemingly unrehearsed highlights. For a quick recap of the 5 best Oscars 2018 moments, keep reading below.

1. Jordan Peele winning best screenplay. The biggest win of the night was Jordan Peele winning best screenplay for his thriller/horror movie Get Out. Besides being an exciting, and surprising departure for often rigid Academy voters, his Oscar also made history. Peele was the first black writer to ever win best original screenplay. To top that, a win for this genre only added to the hugeness of the moment. After watching all of last night’s show, it’s impossible to do a best moments Oscars 2018 recap without putting Peele’s historic win at the top of the list.

2. Annabella Sciorra, Ashley Judd and Salma Hayek. Sciorra, Judd, and Hayek came out to discuss the Times Up movement and present a montage of best films. The presence of these three women, who first came forward to catapult Weinstein and Me too into the spotlight should have introduced a tidal wave of support and standing ovation. Unfortunately though, the moment felt rushed, and not given the significance it really deserved. Though the triplet might have been more cautiously honored than expected, their presence still marked an important turn in where Hollywood is hopefully heading. 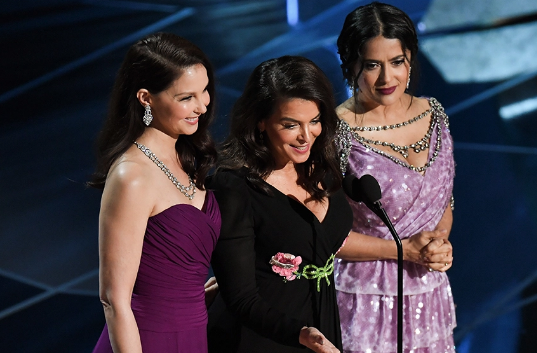 3. Frances McDormand’s speech. Frances was a front runner for Oscar for her role in Three Billboards, so it wasn’t a total shock, or revelation when she won. However, the quirky actresses speech, which instructed all the female nominees of the night to stand up, starting with Meryl Streep (McDormand clearly knows, Streep is the standard) quickly turned noteworthy. Especially once the actress ended her speech with two words that I’m sure by now have gone viral in a Google search. Inclusion Rider. Her words might have left many confused, but they also present a new, and interesting conversation that unlike this year’s Oscars, can continue on into 2018.

4. Helen Mirren ending the show on a giant jet ski. Without the controversy of a best picture mishap, what could be another memorable way to end Oscars 2018? With Helen Mirren of course. The formidable, gorgeous actress came out riding the jet ski won by Mark Bridges. His acceptance speech for Best Costume Design (Phantom Thread) clocked in as the shortest which, as Kimmel promised in the beginning of the evening, would declare him the rightful owner of the prize jet ski.

5. Meryl. At this point, it’s impossible to write a best moments Oscars 2018 recap without mentioning Meryl. By now, she can go by a one name moniker, and though she didn’t have a win, or a big presentation, she was, as usual, a go-to for laughs, and direction. Even when it came to that aforementioned speech instructing all the nominated women to stand up. “Come on, if Meryl does it, everyone else will too”, McDormand urged, as everyone followed suit. It’s clear that even without a movie to promote (although in this case, the Post), Meryl Streep’s fixture in the front row, literally, and symbolically stands as an example, not just to the Hollywood, but to all the powerful females that will one day set their own standard.